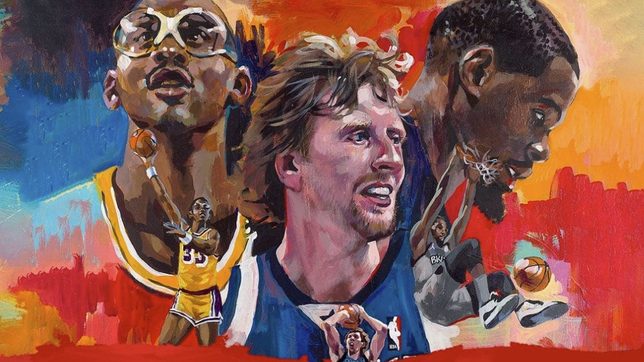 This is part one of our review for NBA 2K22, played on the PS5, focusing on gameplay. Part two will update this review with insight on the game’s other features.

NBA 2K has established itself as the standard for what modern-day sports video games are supposed to be – at the least, for basketball.

But that doesn’t mean the billion-dollar franchise’s can’t improve. Desire for fresh and bold innovations from its player base has increased the past few years, especially following the lack of imaginative new features to take advantage of next-gen power beyond the graphics and presentation – which, to be fair, are top-tier.

The popular belief is: if what you get out of 2K on the PS5 system isn’t that far off from PS4, why spend the extra cash? Here we focus on the changes to the gameplay that we feel make the experience different enough from last year’s 2K.

At first glance, NBA2K22, now available, follows the same formula of its predecessor. Save for a few new placements and players on screen, the main menu is exactly the same.

But there are notable differences in gameplay to reflect the real-life trajectory of where basketball is heading as a sport.

Our broad-strokes assessment, comparing it to last year’s game: The margin for error has decreased; every player on the court is a threat; and the simplest mistakes can lead to moments of exasperation.

In 2K22, the 3-point revolution found in the real game has also finally found its spotlight in this video game.

The AI of 2K is smarter than before. A successful defensive possession is no longer accomplished by simply shutting down what the opponent’s ball-handler is trying to achieve. That’s partly thanks to the more noticeable and quicker “off-ball” motion that leads to open cuts and 3-point attempts, which both you and the game convert in higher volume compared to 2K21.

The 3-point shooting is a game changer. Any grizzled veteran of NBA2K will tell you the simplest contest can drastically alter the fate of an outside jumpshot in the past. That’s no longer the case. Be just a quarter-second late to put your hand up and it’s 3 points for the opponent, even for those who don’t have high ratings. What else for a maestro like Steph Curry?

On the flip side, the player is awarded the same opportunity. The perfect release of a 3-ball will also unlock a unique camera angle to watch the ball sink in the basket, followed by a mini-celebration.

As someone who relies on relentlessly attacking the rim via pick-and-roll on offense, I found myself having to re-adjust my playing style not long after competing in my first matchup (Hall of Fame difficulty), which unsurprisingly turned out as my first loss on 2K against the CPU in more than a year.

It wasn’t until I started taking advantage of the advanced spacing and 3-point prowess that my offense no longer resembled a clogged toilet. When the long-range attack got going, I found my favored penetrating playstyle easier to accomplish, complementing the outside touch for a two-pronged attack. Ultimately, however, headstrong defense is the key to winning.

And that doesn’t come easy. You could perform 10 out of 10 defensive objectives right only to still see your opponents’ score add up because the ball somehow landed in the hands of one of them right underneath the rim. This happens more often that you’d think.

Another example: you could shut down whoever handles the ball initially only for someone else to be completely open because a teammate was crushed by a screen. The game versions resemble the real-life traits of its modeled players, especially on defense.

Speaking of pick-and-roll, the AI’s containment has gotten smarter in shutting these plays down. No longer can the command of “ask-for-a-screen-and-dunk-it” be rinsed and repeated.

There are little changes – such as an opponent bumping your screen man before he gets to you, or the faster containment of the initial defender – that make having a plan B or C necessary, especially as the shot clock dwindles.

Alley-oops are tougher to accomplish. Kyle Lowry simply throwing up a basketball for Bam Adebayo to catch and dunk like a Monstar is, justifiably, no longer automatic.

While throwing a lob remains the same (double-tap triangle on PlayStation), there’s now the added challenge of tapping square at the right time to achieve the dunk.

The added challenge, while sobering at first, is ultimately rewarding once you figure it out.

The presentation adds to the allure. There is variety in the crowd, including empty seats in reference to certain teams’ arenas where fans arrive late (*cough, Miami*). 2K recruited actual in-arena barkers of each team to incorporate the audio in ‘22.

Graphics of arenas, jerseys, and faces slightly improved, but I also wouldn’t blame anyone who says it’s the same.

While many prefer to stick with the old versions in contrast to those who seek the marginal changes with each yearly installment (including updated official rosters), one thing is for sure: NBA 2K still completes what it aims to do, which is to keep you playing what remains the closest simulation of NBA play and culture.

And, of course, as the old joke goes: “Dinagdag nila yung pawis.” – Rappler.com