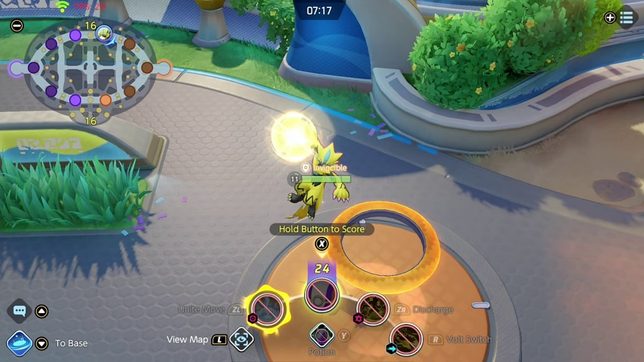 When Pokémon Unite was first announced, it was met with equal amounts of curiosity and excitement, being the first game in the franchise to venture into the multiplayer online battle arena (MOBA) genre.

I was more on the curious side, wondering how the uber-popular property could lend itself to the hypercompetitive and intensely strategic nature of MOBA games like League of Legends and Dota 2.

Personally, I’m not a big fan of the genre, nor am I any good at it. Unite, however, is unlike any MOBA I’ve played before; it’s much easier to pick-up and follow and generally feels more welcoming to newcomers than others of its kind. After all, it is a Pokémon game, and a lot of those who might be interested in it are probably fans of the more accessible mainline series of turn-based RPGs.

For the uninitiated, MOBAs pit two teams of five against each other in a three-lane map. The objective is to destroy the opposing team’s base while defending your own. While Unite retains much of these core ideas, it incorporates enough new mechanics to create an experience that feels fresh and different.

Instead of destroying your opponent’s base, your goal is to score more points than the other team by the end of the match. You do this by battling computer-controlled wild Pokémon using your own selected Pokémon. Defeating them nets you energy, which you have to bring to your opponents’ goal and dunk it through the hoop. The number of points you score is equal to how much energy your Pokémon has stored. Think of it as a mix of basketball and capture the flag.

Your Pokémon earns experience points in battle, which levels it up and increases its power. The higher your Pokémon’s level, the more energy it can store. But it can also drop energy if it’s knocked out, allowing other players, including your opponents, to steal them. It’s arguably the most fun part of the game: making moment-to-moment decisions on whether you want to score faster with only a few points or wait until you hit your maximum capacity but risk losing a lot of energy in case you’re defeated.

Matches in Unite are a lot shorter compared to other MOBAs, with the standard five-versus-five format only lasting 10 minutes. The team that scores more points by the end of that time limit wins. The catch is that you won’t know the scores until the end of the match. The game sometimes lets your team know if you’re struggling or have a big lead, but it never shows you by how many points exactly. All you really can do is to keep scoring or defending your goals, depending on who you think is in the lead, especially during the last two minutes when points are worth double.

The 10-minute match time works in favor of Unite having that “pick-up and play” kind of feel. You can easily slot matches between your daily activities, if you get hooked.

It helps that it launched on a portable platform, the Nintendo Switch, with mobile to follow soon. For context, a typical Dota 2 match could last anywhere from 40 minutes to an hour.

The game has a fairly simple premise, but it can be pretty deep at the same time. Factor in item builds, character synergies, and other meta concepts, and the game becomes no different from other MOBAs.

Of course, you don’t have to take part in all of these if you don’t want to get too competitive and just want to enjoy the game casually. This is what’s particularly great about Unite; it doesn’t have this huge learning curve that can sometimes become a barrier to actually having fun. Even as a MOBA newcomer, you can easily learn the basics and be competent enough to take part in team battles and score points.

Another thing I love about the game is the presentation. The graphics aren’t anything to write home about, but the Pokémon designs are as adorable as ever. There are 21 Pokémon to choose from, as of writing, and they all have distinct moves and animations. Each one even has its own unique dunk move. Snorlax, for example, lays on its back and launches a ball from its big belly towards the hoop.

Performance-wise, the game manages to stay at a relatively stable 60fps when the Switch is docked. Sure, there are occasional dips when things get chaotic, but it never hurts the overall experience. Handheld, on the other hand, targets 30fps, though it’s more prone to frame rate drops and stutters.

The only problem I have with the game is its business model. It allows players to exchange real-world money to buy Item Enhancers, an upgrade material used to increase the level of items. Items provide stat boosts to Pokémon during matches. The higher the level of the item, the higher the stat boosts. It normally takes a few hours to earn a couple of Item Enhancers, and the number of them needed to upgrade an item only increases as it goes up in level.

The game is still completely free, and shelling out cash doesn’t guarantee a win. In theory, however, it does provide players who spend a distinct advantage over those who don’t. This can be a bit off-putting, I know, but unless you’re willing to get down to the nitty-gritty stat numbers, it shouldn’t stop you from really enjoying what is an otherwise fun game. – Rappler.com