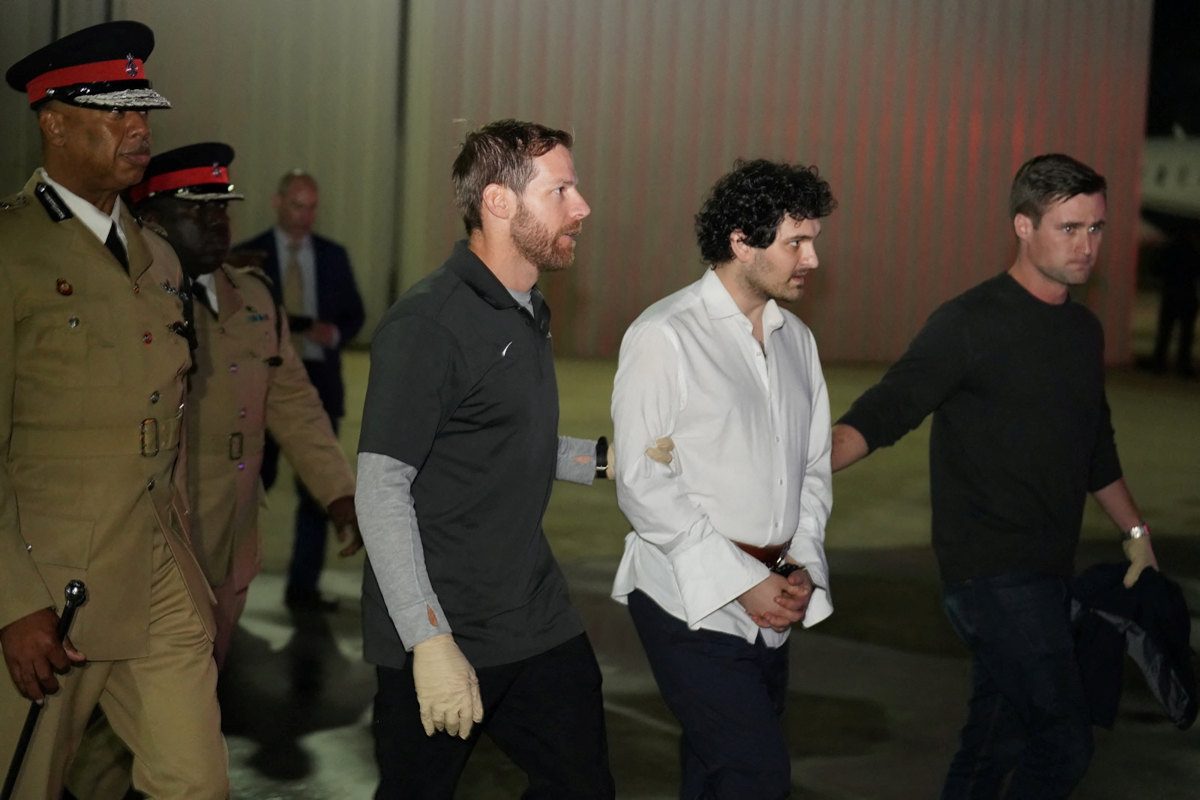 SAM BANKMAN-FRIED. Sam Bankman-Fried, founder and former CEO of cryptocurrency exchange FTX, is walked in handcuffs to a plane during his extradition to the United States at Lynden Pindling international airport in Nassau, Bahamas on December 21, 2022.

FTX founder Sam Bankman-Fried left the Bahamas on Wednesday, December 21, on a US-bound flight to face fraud charges as federal prosecutors announced that two of his former associates had pleaded guilty to similar charges and were now cooperating with the government.

Manhattan US Attorney Damian Williams said in a video posted on Twitter late Wednesday night that Caroline Ellison, former CEO of Alameda Research, and Gary Wang, co-founder of FTX, had pleaded guilty to defrauding investors in the crypto trading platform.

The revelation that two of Bankman-Fried’s closest former associates had decided to cooperate with the government significantly ramped up pressure on the former billionaire.

Williams said Bankman-Fried is now in FBI custody and on his way to the US and urged others involved in the alleged fraud to come forward.

“If you participated in misconduct at FTX or Alameda, now is the time to get ahead of it,” Williams said. “We are moving quickly and our patience is not eternal.”

“I also said that last week’s announcement would not be our last, and let me be clear once again, neither is today’s,” he added.

The US Securities and Exchange Commission (SEC) in a separate statement on Wednesday evening said it had also charged Ellison and Wang for their roles in a multiyear scheme to defraud equity investors of FTX.

The US Commodity Futures Trading Commission also said it had filed fraud charges against Ellison and Wang.

An attorney for Ellison did not respond immediately to request for comment.

“Gary has accepted responsibility for his actions and takes seriously his obligations as a cooperating witness,” Ilan Graff, a lawyer for Wang, said in a statement.

Federal prosecutors in Manhattan last week charged Bankman-Fried with stealing billions of dollars in FTX customer assets to plug losses at his hedge fund, Alameda Research, in what Williams called “one of the biggest financial frauds in American history.”

The 30-year-old cryptocurrency mogul has acknowledged risk-management failures at FTX, but has said he does not believe he has criminal liability.

A spokesman for Bankman-Fried’s legal team declined to comment.

Bankman-Fried rode a crypto boom to become a billionaire several times over and an influential US political donor, before FTX’s crash wiped out his wealth and tarnished his reputation. The collapse was driven by a wave of customer withdrawals amid concerns over commingling of funds with Alameda.

The announcements from Williams and regulators came just hours after Bankman-Fried took off from The Bahamas where he consented at a courthouse to be extradited to the United States.

Ellison and Wang signed the plea deals on Monday, court records show, after Reuters and other outlets reported over the weekend that Bankman-Fried would waive his right to fight extradition.

The agreements call for Ellison and Wang to each post a$250,000 release bond, and states that prosecutors may call for a judge to take their cooperation into account at sentencing if they “provided substantial assistance in an investigation or prosecution.”

Bankman-Fried is likely to appear before a US federal court in Manhattan on Thursday. At his court appearance, known as an arraignment, he is expected to be asked to enter a plea. The US judge would determine whether to grant him bail, and if so, on what conditions.

Bankman-Fried was arrested on a US extradition request last week in The Bahamas, where he lives and where FTX is based. He ultimately agreed to extradition in part out of a “desire to make the relevant customers whole,” according to an affidavit read in court on Wednesday and dated December 20.

Dressed in a suit, Bankman-Fried stepped up to the witness box in court, where he spoke clearly and steadily as he was sworn in.

“Yes, I do wish to waive my right to such formal extradition proceedings,” he told Judge Shaka Serville on Wednesday.

The judge said he was satisfied that Bankman-Fried had not been “forced, coerced or threatened” into making the extradition decision.

The $32 billion exchange declared bankruptcy on Nov. 11, and Bankman-Fried stepped down as CEO the same day. – Rappler.com