On Tuesday, October 13, Santiago announced her presidential bid during the launch of her book, Stupid is Forevermore, driving the “Twitterverse in frenzy for their newfound hope.” (READ: ‘#Miriam2016: Social media rockstar gives netizens hope‘ )

Reporters then asked who her running mate would be, but she only dropped a hint – he is someone who has already declared his vice presidential bid – leaving netizens guessing as to who the “chosen one” is.

Miriam-Bongbong would be a very strong team #Miriam2016

Praying for a Santiago-Marcos tandem, this one is for the books  #Miriam2016

A lot of netizens had already guessed that it was going to be Marcos, and have declared their support for, or opposition to, the tandem.

I hear Miriam's running mate will be Bongbong. I get her naman kasi she needs the political machinery. Let's just not vote for the latter.

Miriam, I love you but a woman of your caliber deserves a much better running mate. #MiriamNotMarcos

If Miriam allies with Marcos that tells me all I need to know about vision for the Philippines. 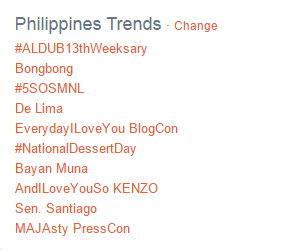 On Thursday, October 15, the Twitterverse exploded with reactions when the social media savvy senator finally confirmed their speculations. By 12:30 pm, Santiago and Marcos were already trending on Twitter.

Miriam chose Bongbong as runningmate. This is as heartbreaking as Chris Paul's buzzer beating layup in Game 7 against the Spurs. 🙁

Some were disappointed with Santiago’s choice, citing the Marcos family’s dark past when its patriarch, the late strongman Ferdinand Marcos, imposed Martial Law.

Nothing against Bongbong, but really Miriam? Do u think he's d right choice 4 ur VP? Even now my FB feed is full of stats about Martial Law.

Miriam-Bongbong? Then if Miriam died because of her sickness (wag naman sana). Si Bongbong papalit? Then martial law ulit?

Miriam confirms Bongbong Marcos as her running-mate me: pic.twitter.com/786CbIrERY

Some speculated that Santiago chose Marcos to improve her chances of winning.

Did Miriam release a statement saying she respects Marcos as VP? Am I too naive to believe that she's using him to get the Solid North??

This could end up like this: Miriam uses Bongbong, wins, then tells Bongbong hu u after. Brilliant politics move hahahahaha

I understand the Miriam needs the Marcos' money for the campaign, but it's like selling urself to the devil. Also, that money is our taxes.

There were those who rejoiced at the news.

If people are starving for a CHANGE then Miriam Defensor Santiago and Bongbong Marcos is the answer! #Halalan2016

We will support Sen.Santiago for President and Sen. Marcos for Vice President!

Santiago said she will run under her own party, the People’s Reform Party, the same vehicle she used for her 1992 presidential bid.

“If I become president sometime in the very near future, this country will be much better than it was before. Today this country suffers from the malaise of plunder,” she said when she declared her bid.

What do you think of this new tandem? Tell us in the comments or write a reaction story on X. – Rappler.com

From Monday to Friday, October 12 to 16, those who want to run for public office are filing their certificates of candidacy (CoC). Help to keep track of these aspirants in your areas. Be citizen journalists at Comelec offices nationwide.