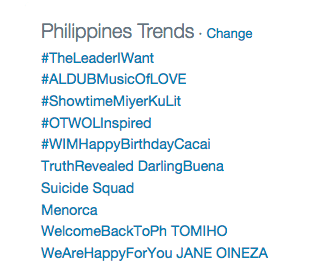 According to Rappler’s social media analytics app Reach, hashtags #PHVote and #TheLeaderIWant collectively brought in 784,073,880 Twitter impressions between 10 am and 11 pm the day of the forum. Impressions are the estimate of the number of people who’ve seen either of these hashtags on their Twitter feed.

The hashtag was used by 8,957 individual authors in a total of 27,727 tweets. Activity with the hashtag spiked at about 5:45 pm, 15 minutes before the forum formally ended.

Apart from a live stream and live blog on Rappler.com, the forum was also broadcast on over 170 radio stations care of DZRH-MBC, and about a dozen television stations care of Media ng Bayan.

What are the possible reasons behind the spike, the instance of trending, and the general popularity of the hashtag?

Here’s a glimpse of the Twitter activity throughout the day on Reach’s maps. Note: The dots are Twitter accounts; the larger the dot, the greater its influence. Colors indicate similar communities/circles, and the lines show the links between accounts. 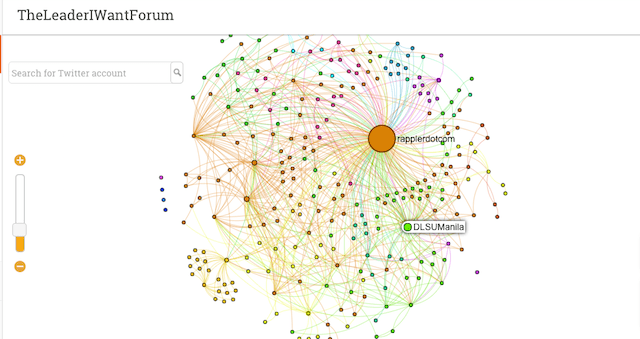 Below is Senyora Santibañez’s top tweet during that period, calling attention to the fact that Duterte was the only presidential candidate present at the forum. Finally, by the end of Reach’s monitoring period at 11 pm, the Twitter accounts using #PHVote and #TheLeaderIWant were numerous and mostly clumped into factions – a huge change from the original map from 3 pm, which was roomy and sparse. Supporters of various candidates caught wind of hashtag #TheLeaderIWant’s popularity, and used it for their respective causes.

Fans of the Duterte-Cayetano tandem were quick to make memes about their being the only ones present at the forum: Ironically, even fans of the candidates who didn’t show up at the forum harnessed the hashtag.

One Facebook user, Xavier Roel Quito Alvaran, spotted a potential “bot” using the hashtag for presidential candidate and current Vice President Jejomar Binay. A “bot” is a software application that runs automated tasks over the Internet, including spamming the same tweet over and over using various accounts. #TheLeaderIWant will never leave anyone behind #POE2016 pic.twitter.com/L8x3CtyOpE

#TheLeaderIWant believes her people can make a difference and they will #POE2016 pic.twitter.com/V7ydeFaimB

All in all, it appears that the controversy of the other invited candidates not showing up at the forum, paired with a strong Twitter influencer using the hashtag and others following suit, were the factors that catapulted #TheLeaderIWant to viral status.

Did you tweet the hashtag #TheLeaderIWant yesterday? In what way did you use it? And what are your thoughts on the forum and its guests?

Share your thoughts with us in the comments below, or blog about it on X! – Rappler.com