Social media is abuzz with praise for the Philippines’ new president, Rodrigo Duterte, who was sworn in Thursday, June 30, at the Rizal Hall of the Malacañang Palace. 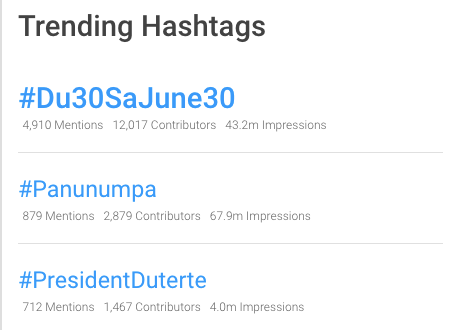 It was no different as he took his oath of office on Thursday.

#Du30saJune30, a wordplay on Duterte’s famous social media monicker #Du30, trended quickly on Twitter, together with #PresidentDuterte, #ChangeisComing, and #Digong.

Filipinos took to social media to express support for Duterte, wishing him good luck and expressing their high hopes for the new administration.

Freddie Aguilar, who sang during the program, also caught the attention of netizens with the lyrics of his song that called out corrupt politicians.

Love the new version that Freddie Aguilar made to his own song just for Mr. President. #Du30SaJune30 #Panunumpa

Inday Sara Duterte is so sultry with her dress and hair tho. loving her

Senti, a real-time visualization of the general sentiments of Twitter and Facebook users, had collected 86,749 tweets about the inauguration by 2 pm. Of these tweets, 47,164 were considered neutral, 26,144 were positive, and 13,441 were negative.

Senti compiled and analyzed posts about the presidential and vice presidential inaugurations based on the words that were used. The analysis covers keywords and terms in English, Filipino, Taglish, and any other variations of the language.

Rappler’s data analytics tool, Reach, also showed that as of 1:30 pm, #PresidentDuterte had received 927,589,803 impressions (number of times a user is served a tweet in timeline or search results). Peter Tiu Laviña, who heads the Duterte campaign media group, also explained to Rappler in a previous interview that the digital army of volunteers is guided by two rules: their posts should be “good for the country” and “good for the candidate.” With these marching orders, they live by their hashtag: #JustDuIt. – Rappler.com