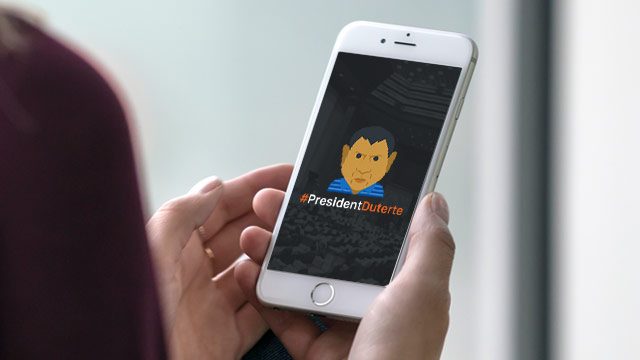 The launch of the hashflag for Philippine President Rodrigo Duterte on Friday, July 1, encourages every Filipino citizen on Twitter to tweet questions, suggestions, or concerns to the new president – quite fitting for the man who made huge waves on social media during his campaign. (READ: How did the presidential and VP candidates fare on social media?)

Twitter users will see a familiar emoji appear when they tweet using the hashtag, the same one used during the campaign period launched by Rappler and Twitter for #PHVote. During the elections, supporters used the #PHVoteDuterte hashflag to voice out why they want Duterte to be president.

#PresidentDuterte trended Thursday, June 30, during the inauguration ceremony with 927,589,803 impressions. Impressions are the number of times users are served the tweets, whether on their timelines or search results.

Updated numbers from Reach, Rappler’s Data Analytics Tool, show that the hashtag has reached 1,037,891,085 impressions the morning after. That’s over 44,000 posts with 20,894 unique authors joining the conversation, and counting.

The impressive numbers are still growing as people use the hashtag to reflect on what they thought of the inaugural speech and to wish the new president luck on his term. During inauguration day, the Presidential Communications Development and Strategic Planning Office launched an automated campaign where Twitter users receive a special message from the President when they tweet using the hashtag #PartnerforChange. Hashflags (hashtags with icons/emojis) are used to encourage Twitter users to rally behind a certain team or a cause.

During the World Cup 2014, netizens tweeted their support for their countries and favorite teams via country hashflags. Cleveland Cavaliers and Golden State Warriors also had hashflags for the NBA Finals.  – Rappler.com