MANILA, Philippines – Everyone tuned in to President Rodrigo Duterte’s first State of the Nation Address and tweeted their thoughts using #SONA2016. As expected, the commentary on Twitter was just as engaging as the main event.

Even before the program started, people were already tweeting their anticipation. The general mood online was optimistic as Duterte’s supporters expressed their excitement to hear the President speak.

According to a report from Creative Marketing Technology Services company AFDigital, tweets started peaked around 4PM.

Students on every school in the country should be made viewers of #SONA2016. The youth shouldn’t be kept blind upon the country’s matters.

As guests started to arrive at the Batasang Pambansa, one stood out: recently-released former president Gloria Macapagal-Arroyo.

“Those who betrayed the people’s trust shall not go unpunished.”

With the arrival of guests came the fashion police, checking out the more understated outfits this year. But even before attendees hit the SONA red carpet, some already zeroed in on the outfit of one lawmaker – Senator Nancy Binay.

For some, Binay didn’t get the “simple attire” memo.

When you’re in the senate but dessert is life #SONA2016 pic.twitter.com/RXKILcjlA7

Congratulations Senator Nancy! You’re still in the running towards becoming… i don’t know.

As for those outside the halls of Congress – Pokemon Go references were on the loose. Gotta catch ’em all!

When it was finally showtime, the President’s speech opened strong with a not-so-subtle swipe at his predecessor Benigno Aquino III, who – as everyone knows – is a little too fond of digging up the past.

Finallyyy! No more listening to a leader holding a grudge to his predecessor & blaming the past administration.#SONA2016 #SONADu30

And just in case you missed this warning during the SONA, we repeat: Do not do drugs!

“I repeat my warning to all, DO NOT DO DRUGS!” #DuterteSONA

The President got points for calling for the full implementation of the reproductive health law – something which wouldn’t sit well with some senators, as social media users pointed out.

We all know Tito Sotto and Manny Pacquiao fell off of their seats when they heard DU/30 is pro-RH Law.

Duterte: Implementation of RH Law must be put into full force
Pacquiao: pic.twitter.com/tgWIpMRwSh

On the production front, director Brillante Mendoza’s creative camerawork did not go unnoticed. He earlier said he wanted to capture the true Duterte. Did he?

Also, as it became evident that the promised 38-minute speech wasn’t going to happen because the President had a tendency to go off-script, concerns grew for the poor soul who would have to transcribe the entire thing.

Those who will transcribe Duterte's speech are the real heroes here

This #SONA2016 is brought to you by San Mig Light. Mahaba-habang usapan!

Overall, the sentiment online during the speech was mostly neutral at 95% followed by positive at 4.3%, according to a report by AFDigital. 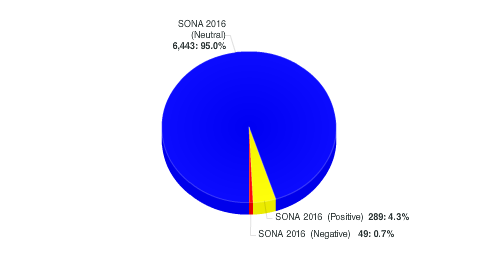 What did you think of Duterte’s first SONA? Any hits and misses? Tweet us using #SONA2016! – Rappler.com