The popular app has always been a place to gather carefully selected and filtered photos of striking moments in one’s life. Overposting is considered a no-no as one person’s photos could take up too many slots on followers’ feeds.

Now imagine the Instagram you’re used to, but with real-time posts that disappear after 24 hours. There’d be less pressure to collect-and-select; you could just go on a posting spree without worrying about how it would affect your blog’s aesthetic or your followers’ feeds.

With this update, users will be able to shoot, edit, filter, draw on, add stickers to, and finally, post photos and videos that would only stay for 24 hours.

“You’ll see stories from people you follow in a bar at the top of your feed – from your best friends to your favorite popular accounts. When there’s something new to see, their profile photo will have a colorful ring around it,” said the Instagram announcement. 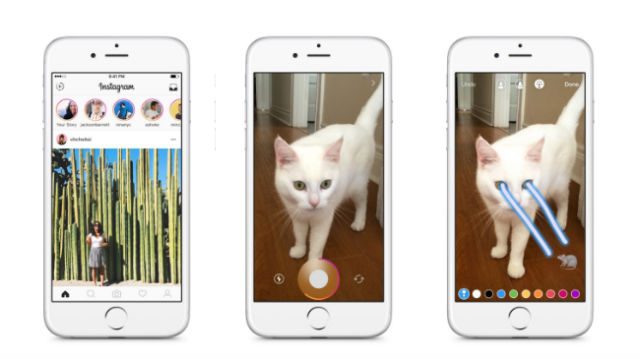 “To view someone’s story, just tap on their profile photo. It’s easy to view stories at your own pace: tap to go back and forward or swipe to jump to another person’s story. If you want to comment on something you see, you can tap and send a private message to that person on Instagram Direct. Unlike regular posts, there are no likes or public comments.”

If this is all sounding a bit familiar to you, it’s probably because this feature reminds you of another popular app: Snapchat.

Snapchat’s biggest feature is that posts shared on the app don’t last very long. Photos or videos sent privately can only be viewed once or twice while those posted on Snapchat’s Stories only last 24 hours.

Snapchat estimates it has more than 100 million active users globally with some reports saying it generates 10 billion video views per day.

“[Snapchat] deserves all the credit,” said Systrom in a Tech Crunch article.

“This isn’t about who invented something. This is about a format, and how you take it to a network and put your own spin on it.”

So, yes, users can expect Instagram’s new Stories feature to have almost the same user interface and characteristics as Snapchat Stories.

The social network began letting some accounts that attract torrents of feedback filter those comments by keywords or even turn off the option to comment on particular posts.

If the test goes well, the anti-harassment feature could begin to spread across Instagram in coming weeks.

Instagram in June said that its user base has surged to half a billion, adding its latest 100 million in less than a year. More than 80% of Instagram users are outside the United States. Instagram has released several updates in the past year, all of which were met with mixed reactions from the app’s users. Instagram Stories is no exception:

When you just wanted chronological timelines back but you get #InstagramStories instead pic.twitter.com/pU839QnfLR

What do you think of the new Stories feature? Tell us what updates you’d like to see next on X!

Instagram Stories will be rolling out globally over the next few weeks on iOS and Android. – with reports from Agence France Presse / Rappler.com