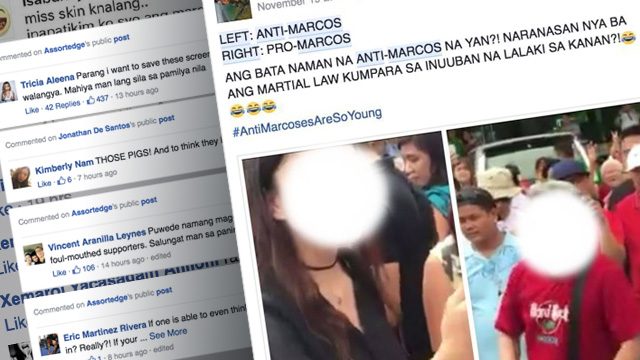 Facebook Twitter Copy URL
Copied
What if these things were said to your mom, sister, daughter, wife, girlfriend, or someone you cared about?

MANILA, Philippines – The Internet is calling out several men for being shameless pigs, after they targeted a female anti-Marcos protester online and posted a barrage of lewd comments against her.

Last Friday, November 18, the nation was shocked to hear the news of the “private” burial of former president Ferdinand Marcos at the Libingan ng mga Bayani. The surprise interment triggered protests in parts of the country.

A Facebook post by a certain John Paul R. Bicerra placed side by side the face of a young anti-Marcos woman and an older pro-Marcos man from the rallies. Another user, Calvin Castro Menrige, then replied in Filipino: “Let’s gang bang her so she won’t be able to bite… Let’s tie her up.”

Their comments have since been taken down but screenshots of their comments already went viral. Unfortunately for them, the Internet does not forget.

On the same post, Facebook user Chriscor Jones commented to repost the photo of the girl and ask how much she is “paid per hour.” Menrige replied to this post again, in Filipino, to say how “delicious” it would be to have sex with her.

The thread carried many other despicable comments of the same nature. 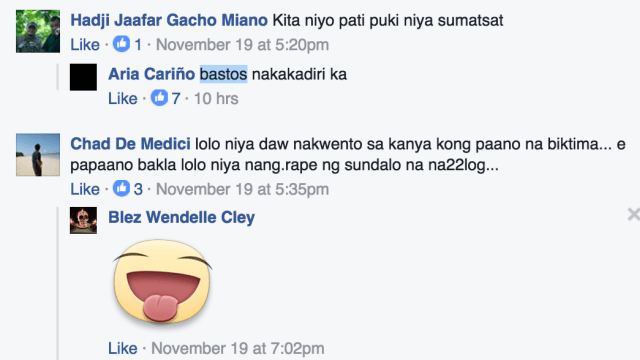 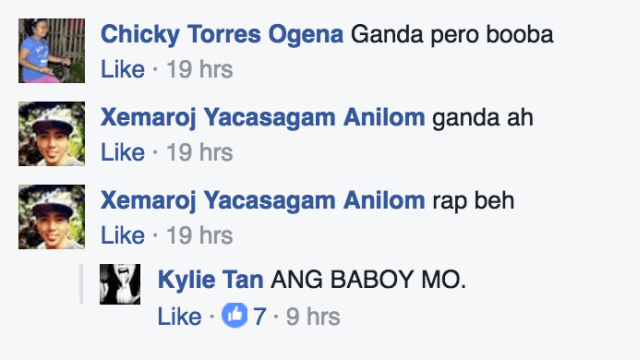 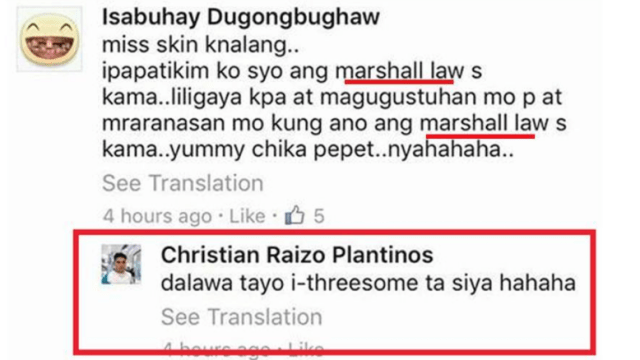 Here’s what other Facebook users had to say about the vulgarity.

Earlier this year, an anti-Duterte voter also received rape threats. This was after then presidential candidate Rodrigo Duterte urged his supporters to “take the moral high ground when engaging in any kind of discourse.”

A rape threat must not be tolerated. In this case, a police report must be immediately filed.

The advancement of technology, however, makes it harder to hold people accountable. It’s easy to take down a post or profile, hide behind a fake name, or change Facebook details.

If you have any information on the culprits – who they are, where they work – it is your civic duty to report them to authorities.

We live in a democratic country so we are free to express our own opinions. However, we should not mistake freedom of speech for freedom to abuse another.

At Rappler, we encourage the community to inspire courage. This includes the courage to admit your mistakes, the courage to fight for people’s rights when they are being oppressed, and the courage to speak when silence means consent.

Help us push for a #NoPlaceForHate environment where everyone feels safe to express themselves – without cyber bullying or harassment.

How are you feeling about all this? Write a blog entry on X. – Rappler.com