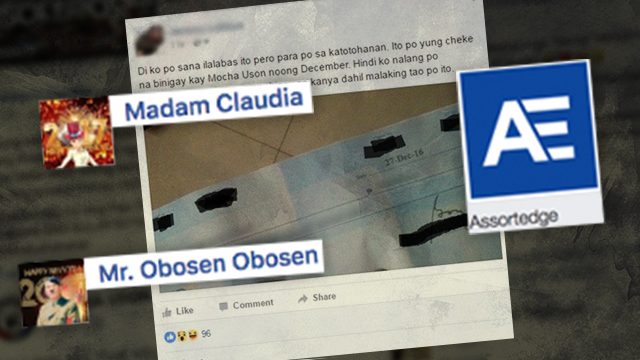 MANILA, Philippines – Another round of takedowns on Wednesday, January 4, hit 3 Facebook pages which are critical of the Duterte administration. The pages – Madam Claudia, Assortedge and Mr. Obosen – were taken down after they posted a photo of a check allegedly issued to Duterte supporter and entertainer Mocha Uson.

In a Facebook post, Uson, however, challenged those who posted the image of a P300,000 check to come forward. She also asked her followers to report the posts.

She pointed out that the check supposedly issued to her does not contain her full name.

Facebook page Superficial Gazette called out the takedown of the pages:

The caption accompanying the photo reads:
“Di ko po sana ilalabas ito pero para po sa katotohanan. Ito po yung cheke na binigay kay Mocha Uson noong December. Hindi ko nalang po ipapakita kung sino ang nagbigay sa kanya dahil malaking tao po ito.” (I didn’t want to release this but this is for the truth. This is the check given to Mocha Uson in December. I did not show the name of the one who gave it because this is an important person.)

The posts allege that the signature matches that of Senator Ferdinand “Bongbong” Marcos Jr. The check is made out to a certain “Margaux Uson” for P300,000.

The Facebook page of Assortedge had over 40,000 likes at the time it was taken down.

Madam Claudia, which was already previously taken down, was again taken down last night. It was back up Thursday, January 5.

Takedowns of pages via mass reporting are nothing new.

The Facebook pages of individuals ranging from journalist Inday Espina-Varona to Duterte supporter and writer Sass Sasot have been taken down in the past.

In some cases, mass reporting can be an organized effort. An earlier Rappler report showed that a group called “Duterte Cyber Warriors” engages in “OPLAN Cyber Tokhang,” which attacks pages and individuals through mass reporting. The group has made previous attack tests on Madam Claudia and Maane Adorna. – Rappler.com