Most instagrammable spots in ASEAN countries 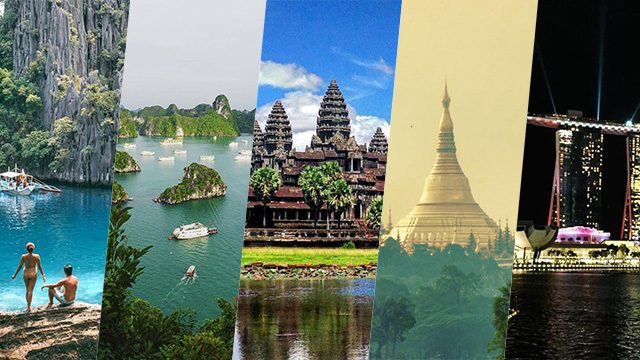 MANILA, Philippines – From its rich culture and remarkable food experience, to picturesque places and tourist spots, Southeast Asia  definitely has a lot of double-tap worthy photos for your social media spaces.

From November 12 to 14, the Philippines hosts the 31st ASEAN Summit and Related Meetings that coincides with the 50th founding anniversary of the regional grouping. It brings together 20 world leaders – ASEAN leaders and their dialogue partners to discuss a wide range of issues and concerns.

The ASEAN members – Brunei, Cambodia, Indonesia, Laos, Malaysia, Myanmar, the Philippines, Singapore, Thailand, and Vietnam – boast of their own travel destinations that can rival the best in the world.

Here are some of the most instagrammable spots in the region that you might consider for your next trip:

Situated beside the artificial lagoon on the banks of the Brunei River in the capital Bendar Seri Begawan, the gold dome of Sultan Omar Ali Saifuddin Mosque shines in the night sky. Built as a place of worship, the structure is one of the tourist attractions in Brunei.

Angkor Wat Temple in Cambodia is one of the most important archaeological sites in Southeast Asia. It is included in UNESCO’s World Heritage Sites and is known for its “cultural, religious and symbolic values, as well as containing high architectural, archaeological and artistic significance.”

Borobudur temple is one of the greatest Bhuddist monuments in the world, located in Java, Indonesia. It was restored with the help of UNESCO in 1972.

A breathtaking snap of cascading water from the 3-tier 29-kilometer Kuang Si Falls located in the outskirts of Luang Parabang is definitely worth space in your Instagram feed.

If you happen to be in Malaysia, Batu Caves in Selangor is a place you should not miss. It features a large statue of Murugan, a Hindu deity.

Shwedagon Pagoda is one of the most important Bhuddist sites in Myanmar. It consists of hundreds of colorful stupas, temples, and statues that mirror the rich architectural heritage of the country.

Your trip to Singapore would not be complete without taking a photo of the picture-perfect view of the famous Marina Bay Sands.

Known for its beautiful temples, Thailand is no doubt one of the best places to visit for its unique architectural design.

The dazzling Sanctuary of Truth is one of the iconic structures in Pattaya, which is still unfinished. Construction only began in 1981.

Ha Long Bay is one of UNESCO’s World Heritage Sites consisting of 1,600 islands and islets. Located in the province of Quang Ninh, the islands are uninhabited, preserving the beauty of the seascape.

This list will not be completed without the Philippines’ El Nido, Palawan. Palawan was named as 2017 World’s Best Island by Travel + Leisure.

Feast your eyes on its azure waters and beautiful lagoons. Fill your feed with its stunning photographs! (READ: El Nido, Palawan: Tips for the budget traveler)

Which of the spots in ASEAN countries above have you visited? – Rappler.com