How big is social media in ASEAN countries? 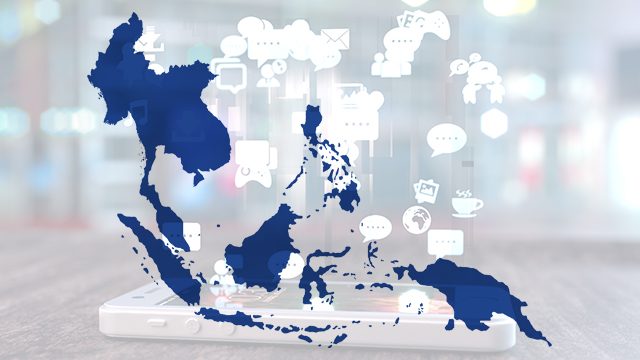 Facebook Twitter Copy URL
Copied
While the biggest social media platforms originated from the West, citizens of ASEAN countries are just as into it

MANILA, Philippines – There’s no denying that social media has drastically changed the way we live: it has transformed the way we consume goods and services, amplified the speed with which information is disseminated, and has even affected democracies.

While some of the biggest social media platforms originated from the West, citizens of ASEAN countries are just as into it.

According to We Are Social’s Digital in 2017 report, the number of active social media users in Southeast Asia grew by 31% in just a year. That’s equivalent to 72 million new users of social media in 12 months after January 2016.

A little bit more than half of Southeast Asia’s population are now on social media.

This growing social media penetration comes with a fast digital growth in the region.

The same report showed that internet penetration in the region has increased by more than 30% in just one year, or 80 million new internet users in 2016. The increasing number of mobile internet users is responsible for much of this growth, where 47% of the total population now has access to the internet through mobile phones.

Brunei has the highest rate of internet penetration at 86% of the total population, followed by Singapore at 82%. Social media penetration is also highest in the two countries.

Meanwhile, barely a quarter of the populations of Laos and Myanmar were active users of social media. 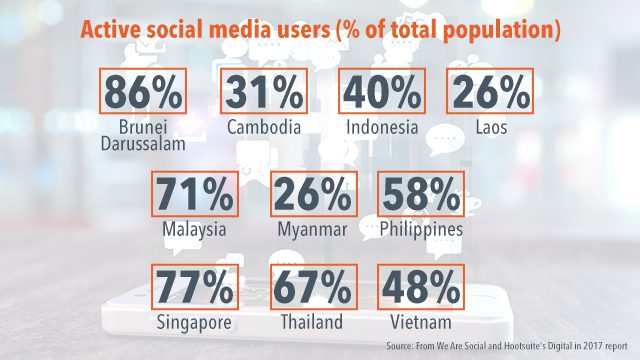 Note that Myanmar lived under military rule for decades which limited its citizens’ access to the internet, until the junta was officially dissolved and many restrictions were lifted. Internet penetration has grown rapidly in Myanmar, where it increased by 97% in 2016. The country also had 84% more social media users in just a year – one of the highest growth rates in the world, according to the report.

While internet penetration in the Philippines is only at 58%, data showed that almost all of the country’s internet users are active on social media. Filipino social media users also use Facebook at an average of 4 hours and 17 minutes a day.

While citizens of ASEAN countries use a wide variety of social media platforms, Facebook remains to have the biggest number of monthly active users. LINE is widely used in Thailand and BBM used to top Indonesia’s rankings. Global Web Index also showed that Viber was popular in the Philippines until Facebook’s own messenger app caught up and went ahead.

The report also said that Zalo remains popular in Vietnam while WhatsApp is the top messenger app in Singapore and Malaysia. – Rappler.com