Facebook Twitter Copy URL
Copied
PCOO Assistant Secretary Mocha Uson shares a post misquoting Canadian Prime Minister Justin Trudeau as saying, 'it is impossible to get the [Canadian garbage] back...' They appear to have heard wrong.

The day after the ASEAN Summit came to a close, Presidential Communications Operations Office Assistant Secretary Mocha Uson shared a post calling out Canadian Prime Minister Justin Trudeau over the trash shipped to the Philippines from Canada.

In the Facebook post, blogger RJ Nieto posted a graphic misquoting Trudeau as saying “Theoretically, it is impossible to get [the garbage] back… even if it originally came from Canada.”

He posted it alongside a caption saying “After the PR blitz, this is what we get from Canadian PM Justin Trudeau. At the end of the day, I’d rather have a crass and ‘unclassy’ president who gets things done. ‘Yung pictures ng pogi? Makakalimutan rin ‘yan. Pero yung basurang nabubulok sa mga ports natin? Hindi.“

(Pictures of the handsome guy? That will be forgotten. But not the garbage rotting in our ports.) 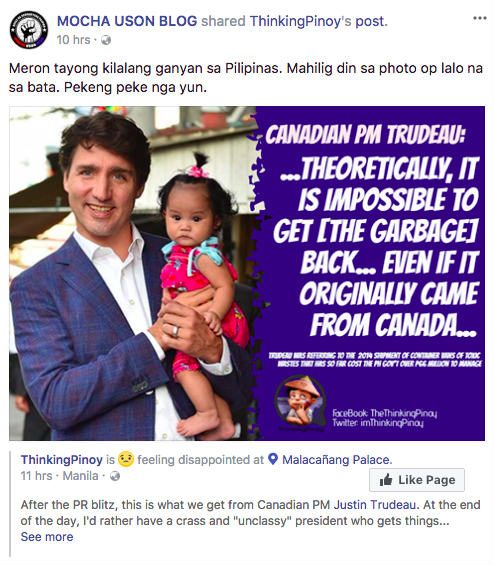 Nieto’s post cited a Manila Times article as the source of the quote. Trudeau was quoted in the Times article as saying: “We have legal barriers and restrictions that prevented us from being able to take it back. Those regulations and those impediments have not been addressed. So, theoretically it is impossible to get it back.”

It appears however that neither Nieto nor the Assistant Secretary, both present at the ASEAN Summit activities, bothered to double check the quote, which, from the video clip of Trudeau’s press briefing, was inaccurate.

In that video, as well as in Rappler’s own transcripts and reports by several other news outlets, Trudeau’s statement was clear: “Even though it originally came from Canada, we had legal barriers and restrictions that prevented us from being able to take it back. Those regulations and those impediments have now been addressed, so it is now theoretically possible to get it back.”

Trudeau has been on the receiving end of the ire of President Duterte and his supporters after raising the issue of human rights and extrajudicial killings during his ASEAN Summit visit.