Feb 14, 2018 3:15 PM PHT
Raisa Serafica
Facebook Twitter Copy URL
Copied
'All the posts of the past two days have been swarmed and attacked by Filipino trolls – every single post. It is crazy and it is full of non-sequiturs,' says computer programmer Carlos Nazareno 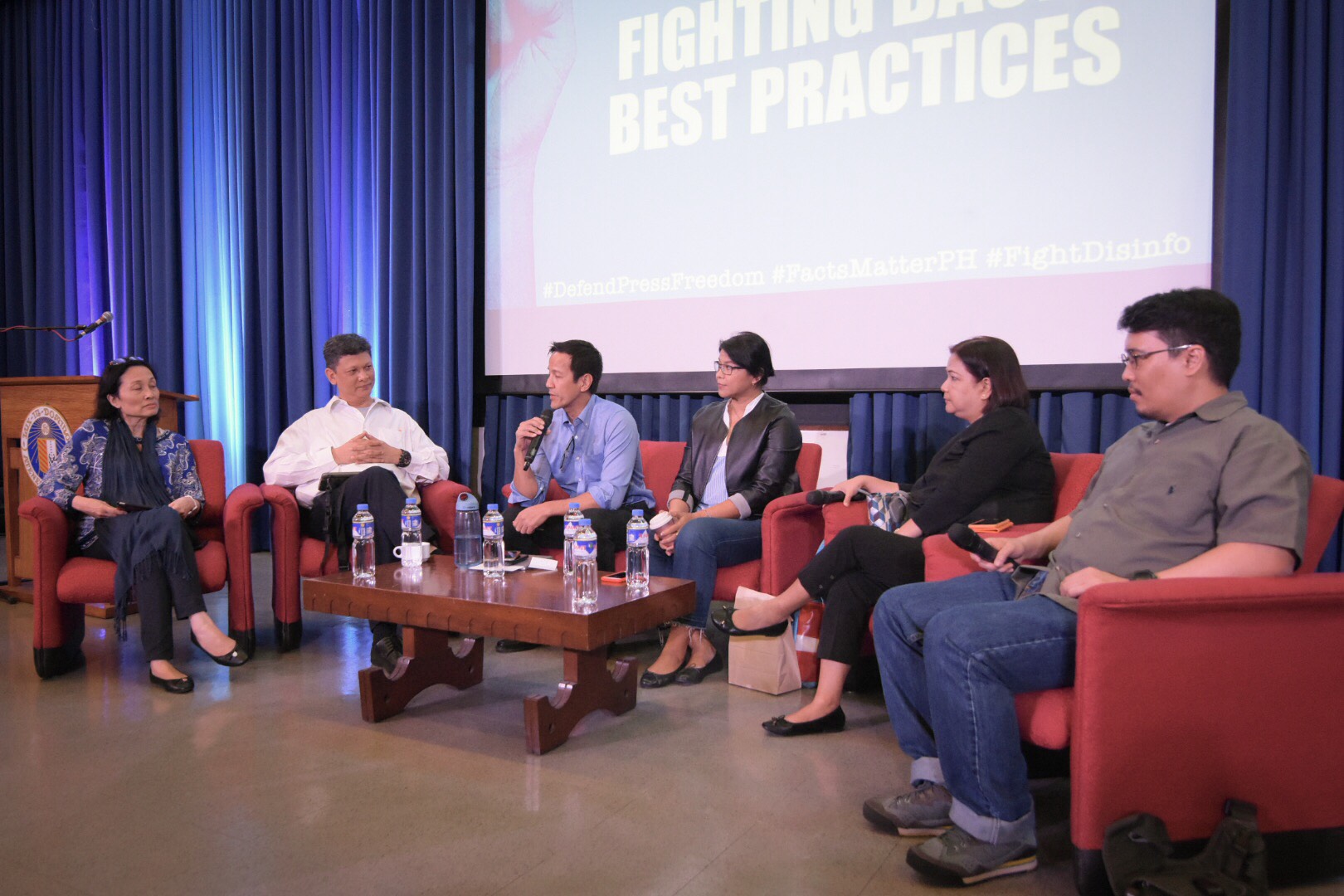 MANILA, Philippines – A week after the International Criminal Court announced it is taking the first step in probing the controversial drug war launched by the administration of President Rodrigo Duterte, government supporters have not stopped swarming the ICC’s Facebook page.

Carlos Nazareno mentioned this on the second day of the Democracy and Disinformation forum organized by a group of media organizations at the Ateneo Law School on Tuesday, February 13. Nazareno is a computer programmer who is proactively fighting historical revisionism by correcting the information about Martial Law as listed on Wikipedia under what are called “reliable sources”

“If you go to the Facebook page of the ICC, all the posts of the past two days have been swarmed and attacked by Filipino trolls – every single post. It is crazy and it is full of non-sequiturs,” Nazareno said.

The video of Chief Prosecutor Fatou Bensouda announcing the preliminary examination alone has racked up over 2,700 reactions and 1,300 comments – an engagement that is rare for the Facebook page, which gets more or less 100 reactions and 20 comments a post.

Not surprisingly, most of the comments are fueled by hate.

During the forum, Nazareno also noted that Filipino netizens swarmed posts that are not even relevant to the Philippines.

“There is a post about children soldiers but Filipinos are commenting on it. It has nothing to do with the Philippines anymore,” Nazareno said.

Nazareno noted that, beyond trolling, there is the bigger problem of the systematic disinformation online. This included the problem of “fake news” – a trend that threatens several democratic institutions worldwide.

Unfortunately, it seems this worldwide problem is worst in the Philippines.

“As of two to three weeks ago, there were 59 international fake news websites on Wikipedia and 94 Filipino fake news websites,” Nazareno said, noting the grim reality online – that the system is being gamed by the trolls. (READ: Fake news law can be ‘dangerous’ – former Al Jazeera correspondent)

According to the computer programmer, “account farms” in the Philippines enable the mass reporting and harassment online. To illustrate, he showed an “enterprising business owner” lying on a bed of sim cards reportedly taken in Lapu-Lapu City, Cebu.

“What they are doing is creating phone-verified accounts on Facebook and Twitter and they use these to create fake accounts for bots or real persons – who are running what are called sock puppet accounts or multiple – and they are doing the trolling. They are botting, commenting, and mass reporting,” Nazareno explained.

“They are not being shut down because, technically, what they are doing is not against any particular law, according to what they claim,” he added.

In a recent study titled “Architects of Networked Disinformation,” media scholars Jonathan Corpus Ong and Jason Vincent A. Cabañes further illustrated this problem. They argued that fake account operators are part of a much wider architecture whose goal is to amplify political messages.

“We found that disinformation production is a professionalized enterprise: hierarchical in its organization, strategic in its outlook and expertise, and exploitative in its morality and ethics,” Ong and Cabañes said. (READ: Chief disinformation architects in the PH: Not exactly who you think)

At the bottom of the paid hierarchy, community-level fake account operators do the work of amplifying script-based disinformation to the grassroot intermediaries, the study says. Grassroot intermediaries are fan page moderators, opinion leaders, and political organizers who do voluntary work. (READ: From Korean idol group to Duterte Supporters on Facebook?)

One of the “chief architects” they interviewed said: “Every time you see a comment, a post, and everything else, don’t just see a screen. There’s someone warm behind that screen, who’s looking for empathy, who’s looking for a solution, for understanding.”

Many of the comments by Duterte supporters on the ICC page amplified a script: “I support the president and I am not a paid troll.” 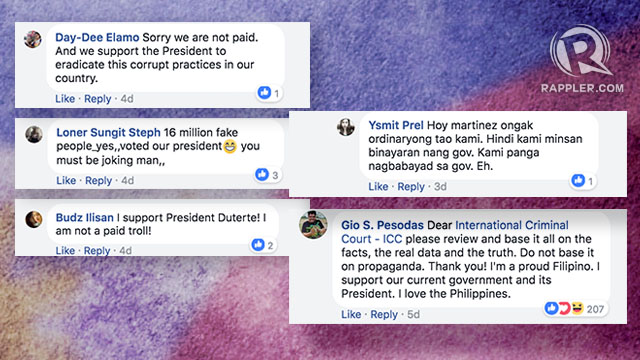 Is it an organic engagement or are they paid trolls? Based on the data we gathered about their online activity, it can be a mix both.

One of the commenters who claimed “I am a proud Filipino and I support the current government and the president” has at least 167 interactions with different Facebook pages since May 2016 – all of which feature comments that are  politically-fueled. Another commenter, on the other hand, showed much less activity – a total of only 48 interactions – with some that are personal in nature.

This poses a challenge to everyone: in the age of social media and disinformation, how do we discern if an account is real and fake online or if a commenter is paid or organic?

Nazareno suggested the following tips to help the public navigate an online environment where the line between fake and real is blurred: