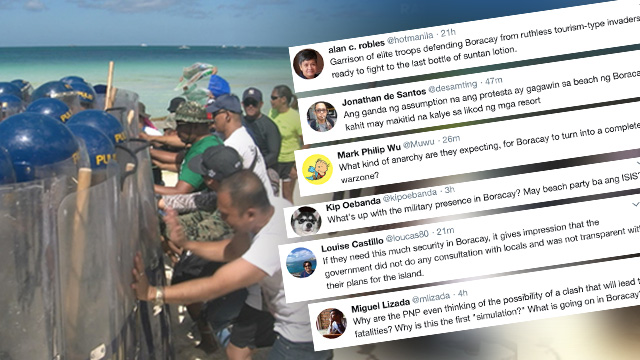 MANILA, Philippines – Filipinos love their action flicks, but the action-packed events on the shores of Boracay on Tuesday, April 24, failed to amuse local netizens.

While authorities said they want to be prepared for potential “threats,” online response has been mostly negative, with the simulations criticized as “overkill.”

Netizens found it unlikely that such situations would occur on the island because of the closure, much less that these would happen right on the beach.

Others also lamented that much effort was put into the security drills, when the West Philippine Sea doesn’t seem to be defended as fiercely, and when Boracay’s closure was prompted by relatively benign environmental reasons.

Here’s a sampling of the reactions:

What are your thoughts on the security drills? Share your point of view on publishing platform X! – Rappler.com