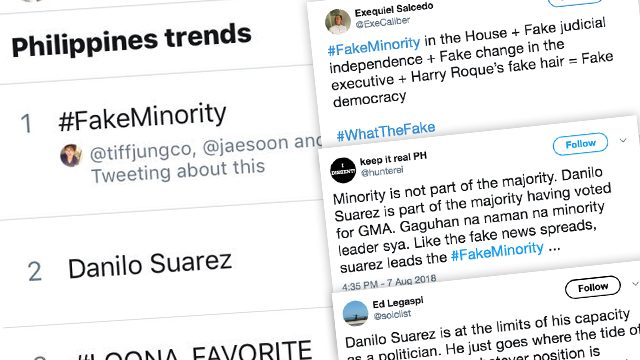 MANILA, Philippines – He, after all, campaigned and voted for Gloria Macapagal-Arroyo as Speaker of the House last July 23. Yet on Tuesday, August 7, Quezon 3rd District Representative Danilo Suarez was also declared leader of the minority bloc in the lower chamber.

A longtime ally of Arroyo, Suarez has held that post since the term of Arroyo’s predecessor, former Speaker Pantaleon Alvarez.

The irony wasn’t lost on netizens, too, who made #FakeMinority trend on Twitter Tuesday afternoon.

The fight over the minority post came in the aftermath of the Arroyo-led coup that ousted Alvarez on the day President Rodrigo Duterte delivered his 3rd State of the Nation Address.

Suarez has said he doesn’t feel threatened at all and that he’s happy he got to retain his position. – Rappler.com