Facebook Twitter Copy URL
Copied
Rolling out to everyone in the coming weeks, Twitter's redesign is bigger, bolder and more visual

MANILA, Philippines – Twitter has always been about text, short bursts of 140 character messages to be exact. Over the years we’ve seen the introduction of photo and video embeds, and cards with thumbnails.

But its latest redesign, rolling out to a select group of users starting April 8, Tuesday, hints of a new Twitter that is more visual.

There is no mistaking the new design bears a striking resemblance to Facebook, with enhanced profile pages that are more visual and personal. It is without a doubt Twitter’s biggest redesign yet.

Twitter announced its second redesign in the last 4 months via a blog post on Tuesday. The popular micro blogging social network began testing the new design last February, just a month after its January redesign that mirrored the aesthetic of its smartphone apps.

The most noticable change is the header photo which spans the entire width of a page – the recommended dimensions for the new header is now 1500×500 pixels.

Profile photos are now super sized, hovering on the lower left corner of the header image – in the same same spot where you’d find them on Facebook. Below that are the user’s details, including username, description, location, website, and date of joining.

There are a few number of ways of displaying the tweets in the new layout. Tweets that receive more engagement are displayed slightly larger. 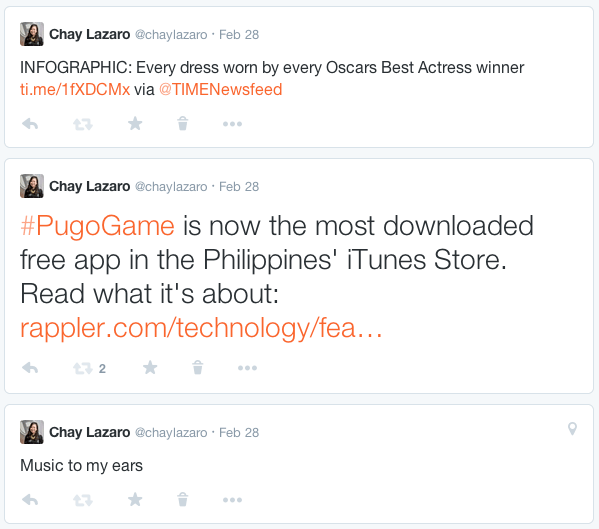 Users can also opt to filter tweets with 3 new timeline options: tweets, tweets and replies, or tweets with photos or videos.

Scrolling down one’s timeline also shows users that have recently been followed. A new, third column is added on the right hand side of the screen containing Trends and Who To Follow.

On click, a tweet no longer expands to show embedded media, replies and favorites, instead it redirects to its respective permalink. Images and video are now displayed on a tweet by default.

Following and followers are now displayed in a grid view, showing even the header photos of the users.

Twitter says new users will automatically get the new profile while everyone else will have to wait for the roll-out in the coming weeks. In the meantime, personalities’ who have been given access to the new profile include film stars @zacefron and @channingtatum, US First Lady Michelle Obama (@flotus), and American boxer @FloydMayweather.

What do you think of Twitter’s redesign? Do you have it already? Let us know in the comments section below. – Rappler.com