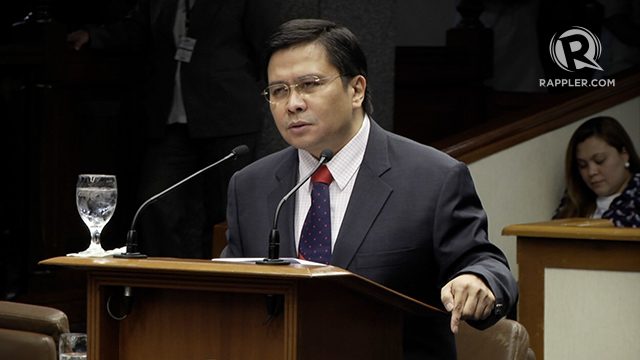 Facebook Twitter Copy URL
Copied
With Twitter users already angry over Sen. Bong Revilla’s speech, Sen. Estrada had a lot to prove if he wanted to win over the public.

MANILA, Philippines –  He did not sing, did not dance, and did not outperform his friend Senator Ramon “Bong” Revilla Jr.

On Wednesday, June 11, netizens expressed dismay over Senator Jinggoy Estrada’s privilege speech, which dealt mostly on his criticism of how the Ombudsman investigated him and his fellow senators.

“Ako ay walang kasalanan,” Estrada declared. (I am innocent). “Hindi ako magnanakaw,” he added. (“I am not a thief.”)

Watch his speech below.

It was Estrada’s 3rd privilege speech at the Senate in relation to the corruption scandal that involves him and many others. His latest speech came two days after Revilla delivered a dramatic one that he capped with a music video.

Here’s what netizens had to say about Estrada’s speech:

Two days before he delivered his speech, the Ombudsman filed separate graft charges against Estrada before the Sandiganbayan for reportedly conniving with fake non-governmental organizations to siphon off public funds to non-existent projects. Last June 6, Estrada was slapped with a plunder case. – Rappler.com

What do you think of Senator Jinggoy Estrada’s privilege speech? Comment below!