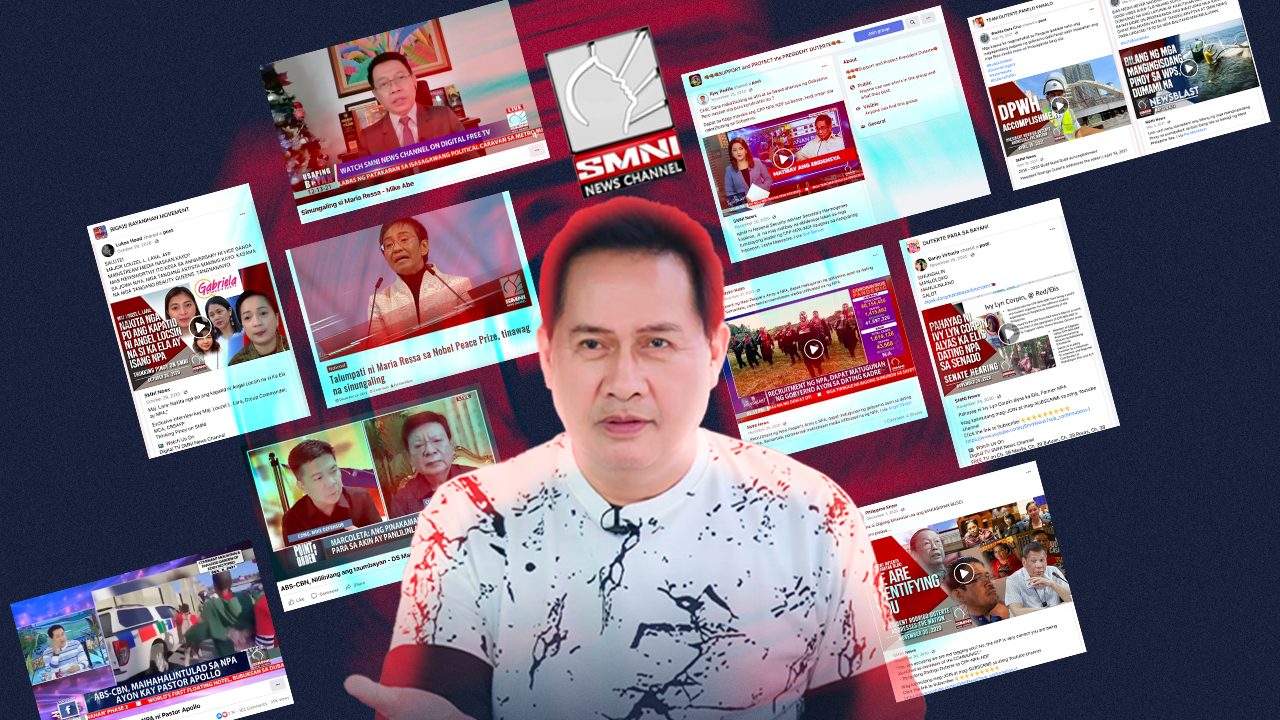 Facebook Twitter Copy URL
Copied
The media network of preacher and US fugitive Apollo Quiboloy disguises propaganda as news, and uses its platforms to attack journalists and activists

Quiboloy has long been mired in scandals, having been accused of land grabbing and indicted for sex trafficking, landing him on the most wanted list of the United States Federal Bureau of Investigation. A Rappler investigative series also found that ex-members of his church, the Kingdom of Jesus Christ (KOJC), were deep in debt due to his financial demands and had suffered emotional and psychological abuse.

Now, his church’s broadcasting arm is receiving government favor in the form of airwaves despite its failure to abide by journalistic standards. The Facebook page of its news and public affairs network, SMNI News, is at the core of the network of accounts, pages, and websites that red-tag government critics and attack the media. It also has a history of sharing misleading information and lending its platforms to hyper-partisan figures.

On several occasions, SMNI News has been used as a platform to attack journalists and red-tag government critics.

When ABS-CBN was denied a franchise after repeated threats from President Duterte, SMNI News published a report on Quiboloy urging the network’s supporters not to blame the government, but the network’s management for “not [doing] their job.”

On SMNI’s Usaping Bayan program, host Mike Abe also told ABS-CBN’s supporters that, no matter how much they rally, Congress would not be able to easily renew ABS-CBN’s franchise.

Despite Defensor and Marcoleta’s claims, other government officials have cleared ABS-CBN of alleged violations, saying the network had regularly complied with tax requirements, labor standards, and franchise terms.

Quiboloy himself compared ABS-CBN to the Communist Party of the Philippines-New People’s Army (CPP-NPA) due to their alleged “bias.” This came after supporters from a Marcos-Duterte motorcade crowded ABS-CBN vehicles, visibly annoying crew members.

When Rappler CEO Maria Ressa received her Nobel Peace Prize in Norway, she talked about the persecution endured by journalists from Rappler and other newsrooms worldwide. In another Usaping Bayan broadcast, Abe had called Ressa a liar, slammed her for being dramatic in front of the international community, and questioned her Filipino citizenship. Ressa is a dual citizen who holds both Filipino and US citizenship.

Attacks against journalists are repeated by SMNI’s readers. Duterte supporters often share SMNI’s content and slam mainstream media outlets for supposedly being “biased” against the administration, and for supposedly not reporting on certain government accomplishments.

SMNI News is in the middle of the network of pages, accounts, and websites that have shared and created posts that attacked the media. Rappler scanned public posts from January 1, 2016, to October 31, 2021, to study posts with mentions of attack words we have collected over years of monitoring online harassment against the press. These words included “presstitute (a portmanteau of press and prostitute),” “bayaran (paid hacks),” and “bias,” among others.

SMNI News’ influence in the network became bigger starting in 2020. This was also the year that its Facebook page’s followers and page likes started to ramp up, based on data from CrowdTangle. Its Facebook page now has over 400,000 likes and more than 900,000 followers, as of February 3, 2022.

An earlier Rappler investigation also found that SMNI News was among the top content sources of red-tagging networks. These reports were then shared by pages and accounts that captioned their posts with statements that blamed the media and institutions, like the Commission on Human Rights, for the supposed communist threat in the country – which they exaggerate. These posts also often contained unverified claims and presented them as facts, such as the accusation that actress Angel Locsin’s sister was a member of the NPA, and that the mainstream media had supposedly been “infiltrated” by communists.

Leftist groups, particularly those that belonged to the Makabayan bloc, were also a top target of these accounts. The posts that shared SMNI News’ posts antagonized leftist groups and justified the attacks made on its members, drowning out the real stories of activists being harassed and killed.

SMNI News pushed this narrative offline too. During the filing of candidacies for the 2022 polls, SMNI’s staff repeatedly asked members of the Makabayan bloc about their alleged communist ties – a line of questioning critics had flagged as dangerous and tantamount to red-tagging. SMNI News has also reported misleading and outright false claims, which have been fact-checked by third-party fact-checkers. These included a quote card of Vice President and presidential contender Leni Robredo which lacked context, as well as a report that claimed dictator’s son Ferdinand “Bongbong” Marcos Jr. “passed” his bachelor’s degree in social studies at the University of Oxford.

The network has also lent their platforms to politicians and personalities who often make false claims – in effect, SMNI does not directly make the claims, the interviewees do. In an Usaping Bayan broadcast in 2020, Senator Imee Marcos falsely claimed that the equipment of the Bataan Nuclear Power Plant was gone – a claim Rappler later fact-checked.

SMNI News also gives commentary programs to public officials and bloggers, including RJ Nieto of Thinking Pinoy and Sass Sasot, who use their platforms to spread government propaganda. SMNI News has distanced itself from the mainstream media. Though it usually publishes content in favor of the Duterte administration, it describes itself as “a true alternative network that broadcasts the uncompromising message of truth giving emphasis to responsible journalism and broadcasting; driven with the purpose to satisfy man’s spiritual need leading to transformation and excellent service,” as stated in its Facebook page.

The KBP encourages the public to submit complaints via their website whenever member stations violate guidelines listed in the code. Those who violate the code are subject to penalties and other sanctions. Individuals who violate the code can receive temporary suspensions and can have their accreditation revoked, while stations can be censured and given temporary suspensions of member privileges.

However, SMNI News continues to broadcast freely, and its hosts continue to amplify lies and propaganda even on social media.

SMNI’s strategy of featuring pro-administration figures and propaganda should not come as a surprise, as Quiboloy is a longtime friend and spiritual adviser of President Duterte.

The network’s roots trace back to early radio and television programs by the media ministry of Quiboloy’s KOJC. Legally known as the Swara Sug Media Corporation, SMNI was first granted a franchise when bills lapsed into law in 1995. In May 2016, the network launched SMNI News, and in 2019 Duterte signed their franchise extension, allowing them to operate for another 25 years, or until 2044.

Quiboloy actively campaigned for Duterte and lent him a private plane during the 2016 national election. The pastor even predicted a landslide victory for Duterte, saying he was the leader the Philippines needed to “slay corruption, drug addiction, and poverty.”

Duterte also admitted that he received other lavish gifts from Quiboloy, including properties and cars, but said that these donations were made “in the name of God.”

Most recently, Quiboloy officially endorsed the tandem of dictator’s son Ferdinand “Bongbong” Marcos Jr. and presidential daughter Sara Duterte for the upcoming 2022 election. He predicted that Marcos and Duterte, the current survey frontrunners, would also enjoy a landslide win.

Both Quiboloy and Duterte enjoy exaggerated, cultish devotion from their followers, to the extent that their wrongdoings are tolerated or go unchecked.

Before Rodrigo Duterte was sworn into office, Quiboloy had said he would not use their longtime friendship to meddle with issues of “national interest.” Duterte had said the same about his friendships, saying “My loyalty to you as a friend ends where my loyalty to my country begins.”