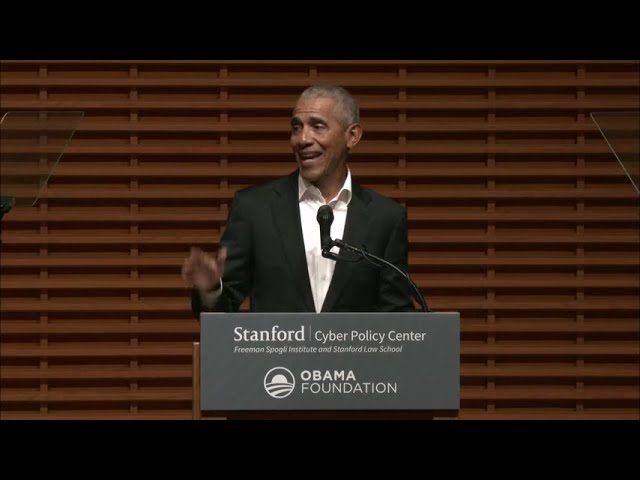 MANILA, Philippines – Former US President Barack Obama on Thursday, April 21, discussed disinformation and its challenges to democracy for his keynote speech at an event hosted by Stanford’s Cyber Policy Center and The Obama Foundation.

He said that while the information revolution was transformative, it has unintended consequences that has seen the information ecosystem “turbocharging some of humanity’s worst impulses.”

Before the advent of these communication technologies that have paradoxically brought the world together and splintered it simultaneously, there was some semblance of order where communities could foster their beliefs and lead a certain way of life without being constantly challenged by an almost infinite multitude of views in a hyper-connected world.

“If you lived in an impoverished Yemeni village, you had no insight into the spending habits of the Kardashians. For some such exposure may be eye opening, perhaps even liberating, but others may experience that exposure as a direct affront to their traditions, their belief systems, their place in society. Then you have the sheer proliferation of content and the splintering of information and audiences. That’s made democracy more complicated,” Obama said.

He acknowledged how technology now has given voice to minorities in contrast to the time when there were only a few big networks. Programming in those big networks did give people a “sense of shared culture” and helped society operate using a “shared set of facts.” Today, we occupy “entirely different media realities, fed directly into our phones,” Obama said.

“And it’s made all of us more prone to what psychologists call confirmation bias, the tendency to select facts and opinions that reinforce our preexisting worldviews and filter out those that don’t.”

Part of the problem as well is that our brains “aren’t accustomed to taking in this much information this fast, and a lot of us are experiencing overload,” Obama said.

The biological reaction to the influx of information is just a part of the puzzle. Perhaps a larger part stems from the tech companies that own the online platforms.

Obama pointed to the “very specific choices” made by these companies that, “intentionally or not, have made democracies more vulnerable.”

He enumerated a number of these choices made by the platforms that may be to democracy’s detriment. The way the content looks on your phone as well as anonymity often make it hard to tell the difference between “say, a peer-reviewed article by Dr. Anthony Fauci and a miracle cure being pitched by a huckster.” On these platforms, “inflammatory, polarizing content attracts and engages” and going viral is often easier when one peddles hate or outrage.

The algorithm that decides which content gets shown to people can also be gamed by “sophisticated actors from political consultants to commercial interests, to intelligence arms of foreign powers.”

Obama explained, “Authoritarian regimes and strongmen around the world from China to Hungary, the Philippines. Brazil have learned to conscript social media platforms to turn their own populations against groups they don’t like, whether it’s ethnic minorities, the LGBTQ community, journalists, political opponents.”

Often, the disinformation aiming to weaken democracies doesn’t always have to be fully believed by the audience, Obama noted.

“People like Putin and Steve Bannon, for that matter, understand it’s not necessary for people to believe this information in order to weaken democratic institutions. You just have to flood a country’s public square with enough raw sewage. You just have to raise enough questions, spread enough dirt, plant enough conspiracy theorizing that citizens no longer know what to believe.

Once they lose trust in their leaders, in mainstream media, in political institutions, in each other, in the possibility of truth, the game’s won.”

Helping elevate journalistic institutions or reengineering platforms to favor the spread of truth rather than just outright engagement could help as well.

Obama said that social media platforms because of their increasing market dominance and their emphasis in speed, the decline of newspapers and other traditional news sources have been accelerated. While there are still outlets that have adapted to the new digital environment, the pressure to maximize engagement more than anything else may not be healthy for the information ecosystem.

“Reporters start worrying about, ‘I gotta tweet something, cause if I don’t, I may be out of a job.’ That’s the information environment we now live in. It’s not just that these platforms have – and there are exceptions – been largely agnostic regarding the kind of information available and connections made on their sites.

It’s that in the competition between truth and falsehood, cooperation and conflict, the very design of these platforms seems to be tilting us in the wrong direction. And we’re seeing the results take over.”

“As citizens, we have to take it upon ourselves to become better consumers of news, looking at sources, thinking before we share and teaching our kids to become critical thinkers who know how to evaluate sources and separate opinion from fact. In fact, a number of school districts around the country are working to train kids in this kind of online media literacy, not around any particular ideological perspective, but just how to check a source.

Does this person who’s typing in his mother’s basement in his underwear seem a credible authority on climate change?  That’s something we should all want to support.”

He also recalled how the US implemented changes after World War II that fostered a better information ecosystem for audiences. “After World War II, after witnessing how mass media and propaganda had fanned the flames of hate, we put a framework in place that would ensure our broadcast system was compatible with democracy. We required a certain amount of children’s educational programming, [and] instituted the Fairness Doctrine. Newsrooms changed practices to maximize accuracy.”

The former president called on tech companies to be “more transparent about how they operate,” and said that the bigger issue should be on the algorithms that choose what the platforms promote rather than on individual posts of people.

“Algorithms have evolved to the point where nobody on the outside of these companies can accurately predict what they’ll do, unless they’re really sophisticated and spend a lot of time tracking it. And sometimes, even the people who build them aren’t sure. That’s a problem.”

He also called for reforms and not a “wholesale repeal,” of Section 230 of the US code, which says that platforms aren’t liable for what people post online. Section 230 has protected tech companies from the content that spreads on their platforms but has been among one of the most debated points when it comes to regulatory talks in the US.

“Social media companies already make choices about what is or is not allowed on their platforms and how that content appears, both explicitly through content, moderation, and implicitly through algorithms.

The problem is, we often don’t know what principles govern those decisions. And on an issue of enormous public interest, there has been little public debate and practically no democratic oversight,” Obama said.

Obama explained how he will evaluate possible solutions:

“The way I’m going to evaluate any proposal touching on social media and the Internet is whether it strengthens or weakens the prospects for a healthy, inclusive democracy, whether it encourages robust debate and respect for our differences, whether it reinforces rule of law and self-governance, whether it helps us make collective decisions based on the best available information, and whether it recognizes the rights and freedoms and dignity of all our citizens.
Whatever changes contribute to that vision, I’m for. Whatever erodes that vision, I’m against, just so you know.” – Rappler.com