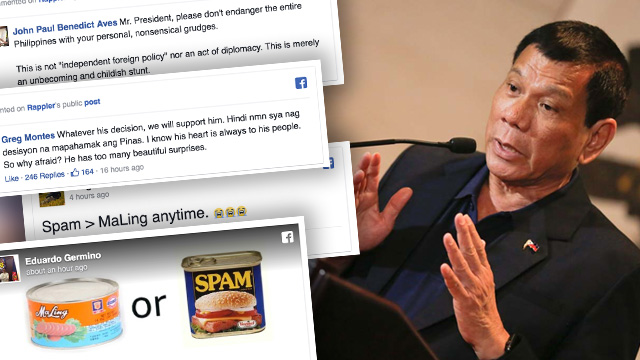 MANILA, Philippines – While President Rodrigo Duterte's colorful rhetoric seems to have become par for the course during official events, many Filipinos were not prepared for his statements during his state visit to China.

“Americans are loud, sometimes rowdy. Their larynx is not adjusted to civility,” he said at a business forum attended by Chinese businessmen and Chinese government officials on Thursday, Oct 20. In the same event, he also said, “I announce my separation from the United States, both in military but economics also," and told those present that he would be more dependent on Chinese ties moving forward.

A day after, Malacañang responded to Duterte's statements. Said Assistant Secretary Marie Banaag: “We still have to wait for guidelines. There is no rush for us to interpret the speech of the President. As to the speech of the President, we have to wait for the guidelines coming from him, coming from DFA as soon as they come back.” The response adds to a growing trend wherein the government has had to step in to elucidate controversial Duterte statements.

The latest from the President – a spate of pro-China, anti-US proclamations – did not sit well with a considerable number of netizens:

A few years later, China takes over and Duterte realizes that he should've taken a Macroeconomic class before embarking on this crazy ordeal — daniel (@DanielAvelina) October 21, 2016 Duterte: "The larynx [of the Americans] is not adjusted to civility." Wow, sayo pa talaga nanggaling ha. — Albert Lirio (@albertlirio) October 21, 2016 Duterte makes me embarrassed of my heritage & I hope that his actions aren't mistaken by Americans as having the support of all Filipinos. — fluffy tuna. (@jon_map) October 21, 2016 Trump: "No one respects women more than me." Duterte: "Americans are loud, sometimes rowdy... their larynx have no sense of civility." — John Mark Legacion (@iamraven07) October 20, 2016 After #Duterte 's visit, watch China to release a new 29-dash line map annexing the Philippines. — t2sv (@tituv2000) October 21, 2016 Some came to the President's defense: {source}

yo whats so bad about Duterte strengthening alliance with china, let them end the beef

From a global political economy standpoint, Duterte shying away from the US actually makes sense in the long term, at least for now

The debate even resulted in a meme pitting the American luncheon meat Spam against its Chinese equivalent, Ma Ling:

How do you feel about the President's statements? Or, at the very least, are you #TeamSpam, or #TeamMaLing? Share your thoughts on publishing platform X! - Rappler.com