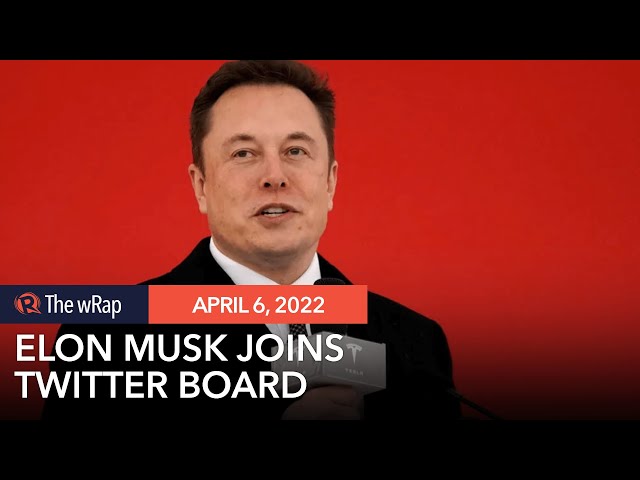 Twitter said on Tuesday, April 5, it will offer Elon Musk a seat on its board of directors, a position the Tesla boss and entrepreneur plans to use to bring about significant improvements at the social media site after disclosing a sizeable holding.

Musk reported in a regulatory filing on Monday that he had amassed a roughly 9% stake in Twitter, making him its largest shareholder.

Beyond the promise of big change at Twitter, Tesla Inc’s CEO, who often chooses unconventional paths, has provided little detail.

Musk will be involved in strategic decisions, including the direction of Twitter’s Bluesky project and the addition of an edit button, according to a source familiar with the situation.

He will not have a say on the platform’s moderation, what speech gets banned or whose accounts get restored, the source said – a policy that applies to all board members.

Musk’s appointment will potentially block chances of his making a takeover bid because Musk, whom Forbes ranks as the world’s wealthiest person, cannot own more than 14.9% of Twitter’s stock either as an individual shareholder or as a member of a group as long as he is on the company’s board.

The disclosure of his stake on Monday stoked widespread speculation, ranging from a full takeover of the platform to taking an active position.

Musk has not indicated an interest in acquiring the company, the source said.

Musk on Tuesday made an amendment to the securities filing to report a change in his status from a passive investor to an active one, amid controversy that he may have filed wrong paperwork.

“Not one to shy away from controversy or speaking his mind, Musk always carries some compliance risks,” said Andrew Wang, managing partner at Runnymede Capital Management.

Musk also disclosed in his filing on Tuesday that he bought the combined 73 million shares in Twitter for $2.64 billion from Jan. 31 to April 1. That works out to an average price per share of $36.14.

Twitter shares had closed at $39.31 on Friday, ahead of Musk’s disclosure of his stake.

Twitter executives tweeted out congratulations after the announcement. There is hope that Musk’s presence can revive the platform, which has struggled to attract users, and possibly stir interest from retail investors.

“He’s both a passionate believer and intense critic of the service which is exactly what we need on @Twitter, and in the boardroom, to make us stronger in the long-term,” Twitter CEO Agrawal said in a tweet.

Musk, who calls himself a free-speech absolutist, has been critical of the social media platform and its policies, and recently ran a Twitter poll asking users if they believed the platform adheres to the principle of free speech.

After disclosing his stake on Monday, Musk put out another poll on Twitter asking users if they want an edit button, a long-awaited feature on which the social media platform has been working.

Bluesky is a company funded by Twitter to develop a new operating standard for social media. The company is working on building an open protocol that would allow different social media companies to operate together.

Musk reached out to Twitter co-founder Jack Dorsey and Agrawal shortly after he built his stake on March 14, telling them he wanted to join the board, according to a source familiar with the situation. They were eager to bring him on board, believing he could bring buzz to the platform as well as good ideas, the source said.

Dorsey tweeted that he is “really happy Elon is joining the Twitter board!” adding that Agrawal and Musk will be “an incredible team.”

Musk’s board position “may lead to some nervousness about Mr. Musk getting too much influence about the way Twitter is run, with a view to bolstering his own personal brand and that of his companies,” said Susannah Streeter, senior analyst at Hargreaves Lansdown.

Musk, a prolific user of Twitter, has made a number of announcements to his over 80 million followers on the social media platform.

His board term expires at Twitter’s 2024 annual meeting of stockholders, the company said.

Musk’s new role as a board member at Twitter could be a further distraction from work at Tesla. He is also the founder and CEO of SpaceX, and leads brain-chip startup Neuralink and tunneling venture the Boring Company. He said in January that Tesla would not launch a $25,000 electric car, saying, “We have … too much on our plate, frankly.” – Rappler.com