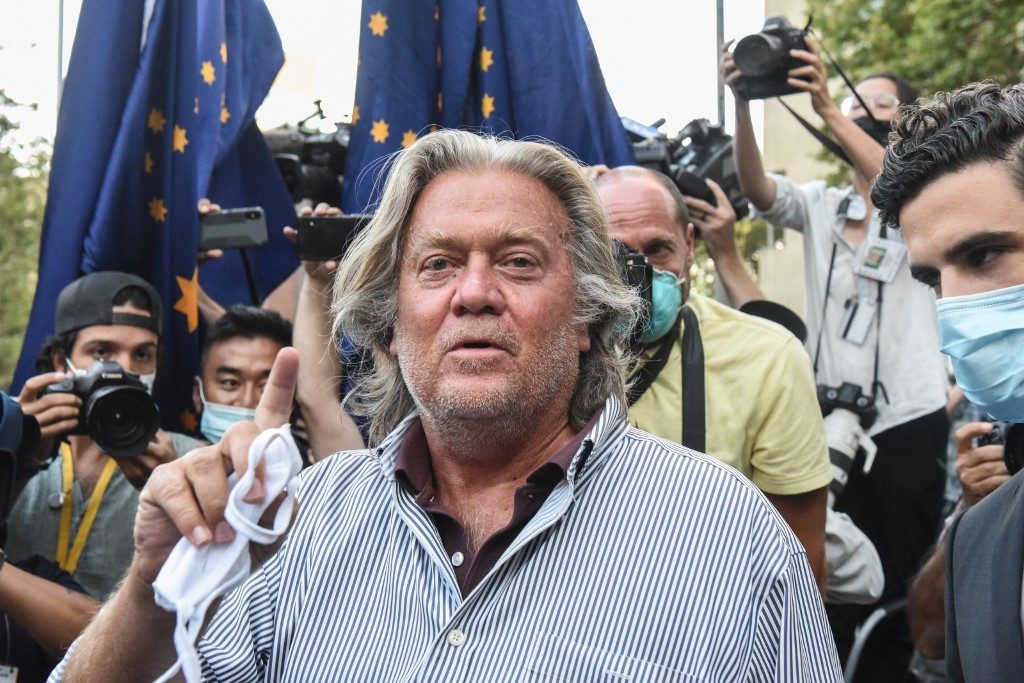 According to the human rights group Avaaz, the social media giant took down 7 pages directly linked to Bannon that had 2.45 million followers and that the group flagged to Facebook content monitors on Friday.

“Our team had identified some of these pages earlier this year for repeatedly sharing misinformation on false ‘voter fraud’ claims potentially reaching 10 million views in the last week alone,” an Avaaz spokesman said.

The pages removed had names such as “Conservative Values,” “The Undefeated,” “We Build the Wall Inc,” “Citizens of the American Republic” and “Trump at War.”

“In 2016, Steve Bannon was buoyed by the Facebook algorithm and helped define the political narrative for millions of Americans,” said Fadi Quran, Avaaz’s campaign director.

“Over the last few months, pages and groups connected to him pushed ‘voter fraud’ and other misinformation content to millions,” he said.

“Now, he is seeking to further divide America and spread chaos in this post-Election Day landscape, again using Facebook.”

“Facebook has finally acted after Avaaz’s pressure, but the question is: Why did the company not act earlier?” said Quran.

The California-based social network had tightened up its rules on disinformation and attempts to subvert the democratic process before the election.

Following Tuesday’s vote, Facebook closed down a page called “Stop the Steal,” which had racked up some 350,000 members by Thursday and was calling for demonstrations in key battleground states where votes were still being counted and the races were neck-and-neck.

The calls to action sometimes came with allusions aiming to stoke violence, including slogans such as #civilwar – prompting Joe Biden supporters to sound the alarm, demanding Facebook shut down the page.

Trump has been goading his followers for months into believing that mail-in voting — a preferred option for many during the coronavirus pandemic — would be rife with fraud, without providing any evidence to back up his claims.

He has not budged since Tuesday night, accusing Democrats of having “stolen” the election and refusing to concede defeat, even as Joe Biden was proclaimed the winner on Saturday.

Twitter and YouTube, for their part, cracked down on Bannon after he suggested senior US officials should be killed.

YouTube cited the same reasons for sanctioning the channel “Steve Bannon’s War Room,” which is, however, still active and has 200,000 subscribers.

Bannon tweeted that he would “put the heads on pikes” – in a reference to Tudor-era England – as “a warning to federal bureaucrats.”

Bannon was one of the architects of Trump’s successful 2016 presidential campaign and served as a White House adviser before being forced out by the president.

Prosecutors said the online crowdfunding campaign known as “We Build the Wall” raised more than $25 million, which the defendants promised would go towards construction of a southern border barrier but was siphoned off instead. – Rappler.com