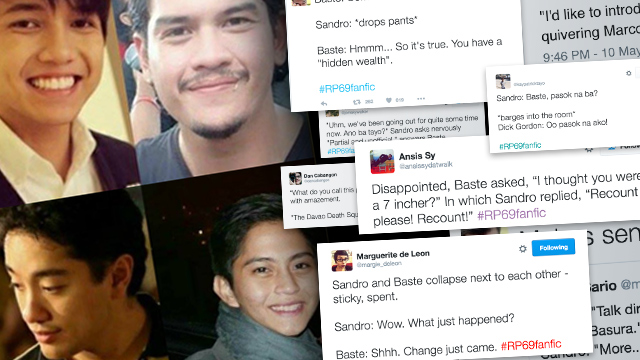 MANILA, Philippines – It all started the evening of May 10, Tuesday, when film critic Philbert Dy had the idea to do saucy fictional tweets featuring Sebastian Duterte, whose father Rodrigo is the presumptive President-elect in the 2016 polls, and Sandro Marcos, whose father Bongbong is a very close second to vice presidential poll lead Leni Robredo.

I'd like to announce my new project: a Sandro Marcos-Sebastian Duterte slashfic. — Phil Dy (@philbertdy) May 10, 2016

This set off a flood of similar tweets, which soon included other popular personalities during the 2016 elections, from Vice President Jejomar Binay's son Junjun to actress Alma Moreno. A hashtag, #RP69FanFic, was eventually established.

Here's a sampling of tweets using the viral hashtag. Most tweets are satirical in nature, as they include references to and commentary on what occurred during these personalities' respective campaigns, family history, etc.

As of writing,  the hashtag has generated 37,300 tweets and counting, and continues to be on Twitter's roster of top Philippine trends.

What do you think of this sudden wellspring of saucy satire? Let us know how you feel about it on X! - Rappler.com