Facebook Twitter Copy URL
Copied
The hype machine refers to how the current design of social networks catalyzes the spread of false, emotion-stirring content on social media, detrimental to mostly everything except the bottomline of social media companies and politicians aware of the machine’s design and how to exploit it

A new book by Sinan Aral, the Massachusetts Institute of Technology’s director of the initiative on the digital economy, explores the neuroscience behind social networks, the “levers” that control the “hype machine,” and how this “hype machine” has transformed society.

The Hype Machine: How Social Media Disrupts Our Elections, Our Economy, and Our Health–and How We Must Adapt came out on Tuesday, September 15.

The hype machine refers to how the current design of social networks catalyzes the spread of trends and false, emotion-stirring content on social media, which has been detrimental to mostly everything except the bottom line of social media companies and politicians aware of the machine’s design and how to exploit it.

In a Rappler Talk episode with Rappler executive editor Maria Ressa, Aral discusses the book, including how the hype machine’s design has led to deep polarization that has effectively erased the important middle ground that has, up until this point, allowed society to function with civility. 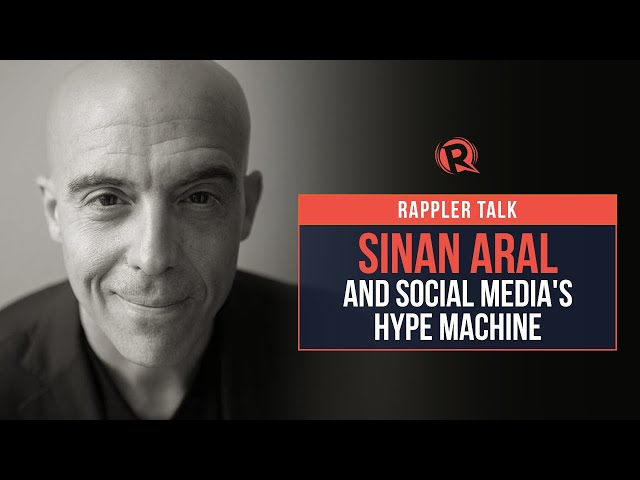 It’s either you’re team blue or red in the era of the hype machine. If you look at charts plotting political affiliation now, it appears like two peaks with a long valley separating it, whereas in the past, it may have looked more like a plateau.

On a more intimate level, isn’t uncommon for people now to trim their contacts list down to only those they agree with, creating what has been called an echo chamber, and separating people into tribes with spears at the ready.

One of the design features that has enabled this devolution into digital tribes is the “friends of friends” growth design.

Aral explains what this means. “Well, in friends suggestion algorithms which vastly are responsible for the connections that we make on LinkedIn, Facebook, Twitter and the rest are – it’s a hard problem. I need to find people to recommend to you to connect with. It’s difficult to search the billions of people on social media to recommend someone to you. So it’s an easy engineering shortcut to make those algorithms run more smoothly and efficiently [by just looking] at your friends of friends.”

While this is an easy fix for social networks, it has also resulted in unhealthy segregation. People are not straying far from their original social circles, which may result in a shortage of perspective.

“But if I do recommend to you friends of friends or I disproportionately recommend Friends of friends, it’s going to enhance and amplify the clustering of society into these tightly knit communities that are so far apart from each other but are much more densely connected within,” Aral added.

“That combined with the business model and the algorithmic amplification of engagement where I am trying to get people really to share a lot, to comment a lot and to just get riled up. Which is why I call it the hype machine, algorithms that favor salacious content, false content, you know, things that are blood-boiling.”

According to Aral’s explanations, the way we grow our networks, it’s already biased towards people that are already near our own beliefs. These connections are made stronger because of an algorithm that favors content that is triggering, reinforcing one group’s biases and making the other group completely wrong.

It is not uncommon for people to unfollow friends because of a difference in beliefs. It’s perhaps natural behavior to connect with like-minded people, and avoid those with different beliefs. But when people have such a hard-coded, precise way of trimming their network of friends through a digital platform, and when that friend network is also one’s primary source of information, it truly devolves into spiteful tribalism.

Such a design can naturally be vulnerable to those in power who’d like to cleanly segment society for their own interests.

In the past, we got our information from one place – TV, magazines, newspapers, independent websites – and we socialized elsewhere. Now, it’s all in one place – a place that, above all and above the guise of connecting us, prioritizes engagement and content being spread – and it’s been messy.

One can say that, for the sake of profit and of being and remaining the biggest – the tech scene has been described as unforgivingly competitive – the nuances of analog life had not been properly and ethically replicated in the digital sphere.

Aral says: “If you have a machine whose algorithms essentially cluster the groups further and further apart and tightly knit communities that are themselves very closely connected, but not a lot of connections across the groups. You lose that common ground entirely.

And in fact, if on top of that, you have algorithms that are feeding different sets of information to these two different groups, then not only are they going to lose their common ground, but they’re also going to have different perceptions of reality entirely – which makes it almost impossible to have a conversation or a civil society in that kind of environment.

That’s why it’s so important to understand the science of these geeky algorithms is essential because it’s determining what people think and see every day.”

Aral also says the focus of the book would be to address the issues of the hype machine as it relates to its business model, the design of the platforms, societal norms and society’s understanding of these technologies, and institutional regulations around privacy, hate speech, anti-trust and the like.

The right people are needed to fix this, says Aral, noting how he watched US senators and the congress question Mark Zuckerberg and other tech executives, and how sometimes, they’ve looked out of their depth.

And leading up to this point, if you’ve seen The Social Dilemma on Netflix, it’s been “growth hackers” that have made a huge impact on social media design, with ethicists becoming treated almost like anti-growth radicals within their companies.

“We need a national commission here in the United States that involves business leaders, scientists, journalists, ethicists, very important, as well as political leaders to come together to create common ground and to discuss these issues together,” Aral says.

“And the public activists (and) journalists need to demand that that common ground creating conversation is institutionalized in real governmental organizations that are diversely populated with the right experts and with the right perspectives.” – Rappler.com

US advisers say no need for Disinformation Governance Board