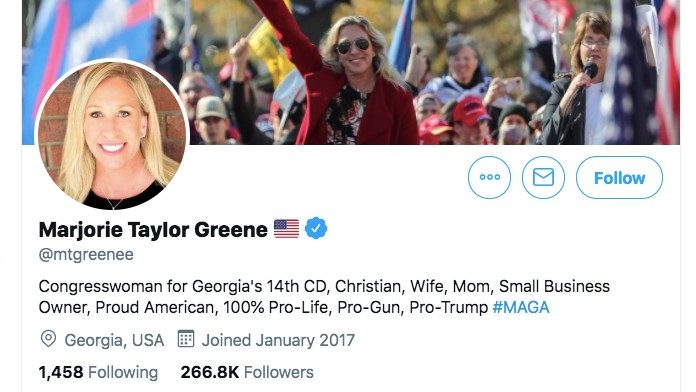 Greene’s account “has been temporarily locked out for multiple violations” of Twitter’s ‘civic integrity policy’, a company representative said in an emailed statement.

Greene accused Twitter of suppressing conservative political voices. “The borderline monopolistic stranglehold a few Big Tech companies have on the American political discourse is out of control,” she said in a statement.

Greene promoted online conspiracy theory QAnon in a 2017 video but later backtracked, saying it was not part of her campaign. She won a House seat in conservative rural northwest Georgia after her Democratic opponent dropped out.

QAnon backers have pushed conspiracies on social media that include the baseless claim that U.S. President Donald Trump secretly is fighting a cabal of child-sex predators, among them prominent Democrats, figures in Hollywood and “deep state” allies.

Twitter suspended tens of thousands of accounts primarily dedicated to sharing QAnon content after the violence in Washington earlier this month when supporters of Trump stormed the U.S. Capitol.

The attack on the Capitol by Trump supporters delayed certification of President-elect Joe Biden’s election victory by several hours that day, as lawmakers were forced to flee to seek safety from the angry mob who had overwhelmed security forces.

Five people died in the violence including one Capitol Police officer.

After the attack, Twitter removed Trump’s account, which had 88 million followers, due to the risk of further violence.

Trump, who has challenged the validity of Biden’s victory without producing evidence, initially praised his supporters but later condemned the violence. – Rappler.com