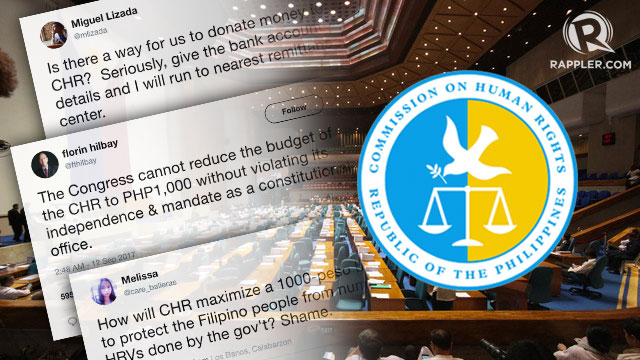 MANILA, Philippines – How much are human rights worth?

On Tuesday, September 12, netizens slammed the House of Representatives for voting to allocate only P1,000 to the Commission on Human Rights (CHR) for 2018.

Acting on a motion by SAGIP Representative Rodante Marcoleta, 119 voted in favor of giving the Constitutional body a measly P1,000 for the coming year while 32 legislators voted against it.

The House of Representatives votes to give the Commission on Human Rights only P1,000 for 2018. What are your thoughts on this? pic.twitter.com/x3kS7WKTUw — Rappler (@rapplerdotcom) September 12, 2017 Shit muntik ko na matapakan human rights natin. pic.twitter.com/RPwMU8NrUh — Rein Bugnot (@reinneverstops) September 12, 2017 1000 pesos for 103,300,000 Filipinos Let us never forget that for this government, our human rights are only worth Php 0.000009 apiece #CHR — Angelo Silva (@juangelosilva) September 12, 2017 If this isn't a rubber stamp Congress, I don't know what is — Moses Albiento (@mosesalbiento) September 12, 2017 Reducing the CHR's budget is reducing the budget of the poor, the marginalized, the powerless, the oppressed. — Harold Malig Goméz (@roldiegomez) September 12, 2017 How will CHR maximize a 1000-peso budget to protect the Filipino people from numerous HRVs done by the gov't? Shame. — Melissa (@care_balleras) September 12, 2017 The CHR was formed exactly as a response to the abuses of martial law & dictatorship. Defunding it would mean we are going back to that era. — LEI, REANGLED. (@legallytanned) September 12, 2017 'Yung mas mataas pa 'yung sweldo ni Mocha Uson kaysa sa budget ng CHR for next year. Ang hirap mong mahalin, Pilipinas. — Ariesa Domingo (@beeyotchWP) September 12, 2017

Related keywords like "Human Rights", "House", and "Congress" were quick to land on Twitter trending topics in the Philippines. 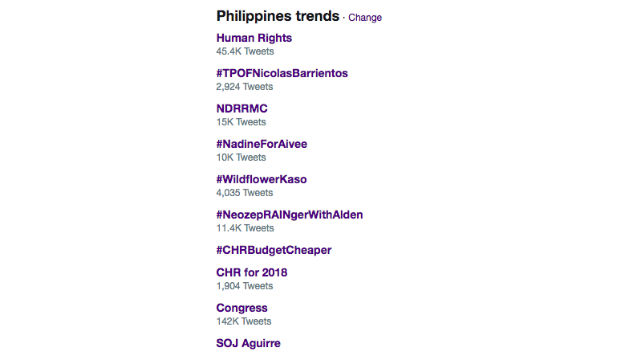 Netizens started comparing the P1,000 budget to several items using #CHRBudgetCheaper, in an attempt to show the absurdity of the decision.

What does this House decision mean for the CHR? Here are tweets explaining what will happen next:

How does the budget process work?

What do you think about House's decision during the budget debates? Let us know in the comments section below. – Rappler.com