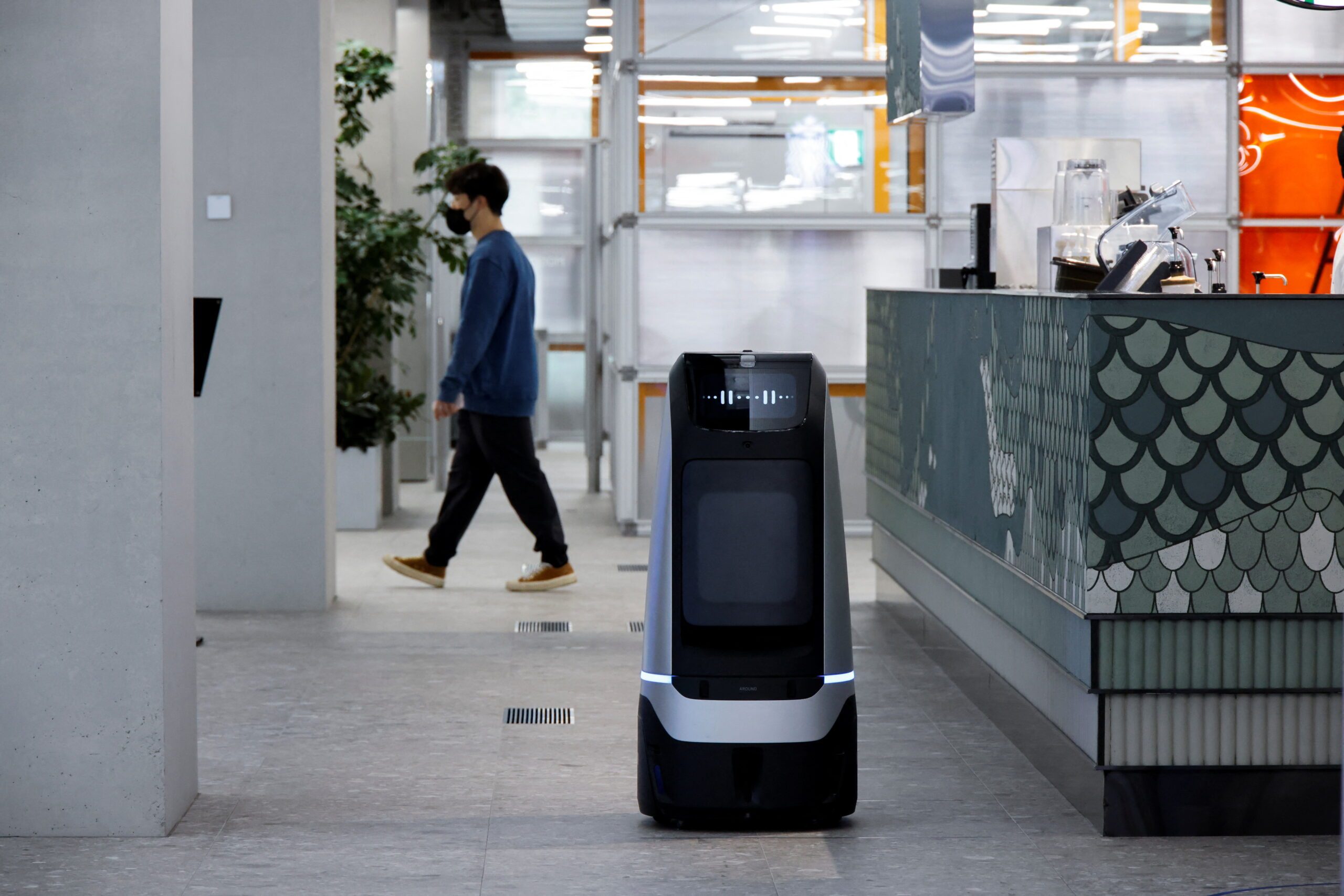 5G. A robot using 5G network moves during a demonstration at the Naver 1784 company office in Seongnam, South Korea, May 13, 2022

Facebook Twitter Copy URL
Copied
Tech company Naver currently has about 40 robots at its headquarters, delivering parcels and coffee to humans, and controlled through the cloud via a private 5G network

On weekdays, South Korean tech company Naver Corp’s new headquarters near Seoul resembles a scene straight out of a science-fiction movie, with some 40 robots ambling across floors and delivering parcels and Starbucks coffee to humans.

The Rookies, as the robots are called, weave their way between people and even take a see-through elevator reserved for them to traverse the building’s 28 floors. Crucially for Naver, the Rookies’ brains are stored in the cloud and connected to the robots via a private superfast 5G network.

While the robots seem to be doing their jobs well, senior Naver executives are cautious on the commercial future of the fledgling robot business, on which the company has already invested $550 million, as 5G technology presents challenges.

“This will be a long-term task,” Seok Sang-ok, CEO of R&D arm Naver Labs, which leads the robots project, told Reuters, declining to make any financial forecasts for the business.

Naver is South Korea’s dominant search portal operator and one of its 10 most valuable listed companies with a market capitalization of $35 billion. It has been making a push into 5G, becoming the country’s first non-telecoms company to be allowed to run a locally licensed 5G network in December.

Naver’s cautious outlook for the robots business underscores the challenges companies face in turning innovative ideas that 5G has promised into commercial successes.

And even in a technologically advanced country such as South Korea, Asia’s 5G pioneer which launched a fifth-generation mobile network in 2019, demand for the service has remained muted and telcos have been reluctant to invest the massive sums needed to ramp up connection speeds to support services like autonomous driving.

While Naver’s robots currently perform basic functions and their reliability is being tested in comparatively controlled settings, Naver executives are banking on its affordability as a USP for wider use.

Naver declined to disclose the robots’ price, but said the removal of the central processing unit and graphics processing unit from the robot and keeping its “brain” in the cloud can reduce a unit’s cost by more than $1,500.

“5G’s low latency is the key to ditching computers inside robots so it can access large computing power unlimited by robot size,” said Seok.

Naver plans to increase the number of robots to 100 this year and also enable them carry out set-up and maintenance work at its massive data center that will be completed in 2023. The center will span 300,000 square meters and be able to operate at least 100,000 servers, matching the scale of Microsoft or Apple’s largest data centres, according to the company.

“5G is a network with many advantages, but it has to be optimized for robots instead of phones. No one can do it, but we are doing it,” said Naver Labs’ Won Choong-lyol in the interview. – Rappler.com