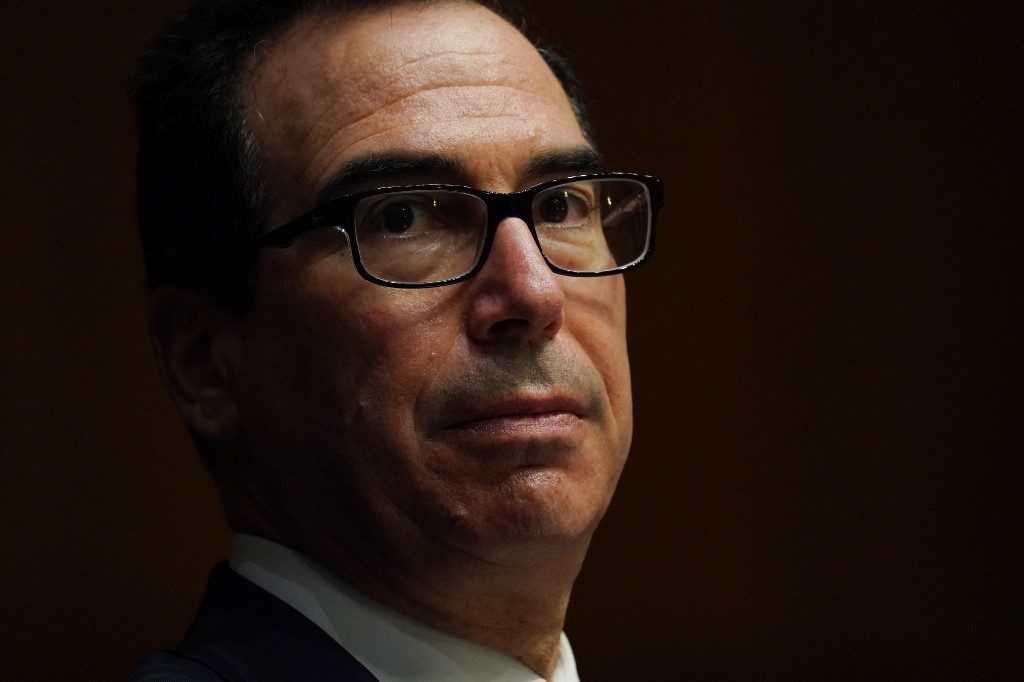 STEVEN MNUCHIN. US Secretary of the Treasury Steven Mnuchin testifies during the Senate's Committee on Banking, Housing, and Urban Affairs hearing examining the quarterly CARES Act report to Congress on September 24, 2020, in Washington, DC.

The United States on Monday, November 30, imposed sanctions on a major Chinese electronics and engineering company for assisting Venezuela in curbing dissent on the internet.

The US said it was restricting transactions with the China National Electronics Import and Export Corporation (CEIEC), and blocking assets of any firm in which the state-owned company holds a 50% stake or higher.

The Treasury Department said CEIEC provides expertise to Venezuela’s state-owned telecom company – which has blocked independent media as well as livestreams by opposition leader Juan Guaido, who is recognized as interim president by at least 50 countries, including the US.

“The United States will not hesitate to target anyone helping to suppress the democratic will of the Venezuelan people and others around the world,” Treasury Secretary Steven Mnuchin said in a statement.

The Treasury Department described CEIEC as offering a “commercialized version of Beijing’s ‘Great Firewall,'” that scrubs out politically sensitive material from the internet accessible to ordinary people.

CEIEC on its website describes itself as selling “solutions that protect the most basic rights of every citizen,” and also mentions business interests in Bolivia and Ecuador.

China is a major supporter and commercial partner of oil-producing Venezuela, helping leftist leader Nicolas Maduro survive a nearly two-year US-led campaign to topple him as he leads an economy in shambles.

Beijing slammed the US sanctions on Tuesday, December 1, as a “pure pretext to suppress the relevant Venezuelan and Chinese companies.”

“We are also firmly opposed to the abuse of unilateral sanctions and other means to coerce the Venezuelan people to change their development path,” Chinese foreign ministry spokeswoman Hua Chunying said at a routine briefing.

“China will take the necessary measures to safeguard the legitimate rights and interests of its own enterprises,” she added, without specifying further.

Venezuela on Sunday will hold legislative elections in which Maduro hopes to take back the National Assembly, the only institution controlled by the opposition, with Guaido boycotting what he and several international observers see as a rigged process.

US Secretary of State Mike Pompeo said that CEIEC “has been supporting the Maduro regime’s malicious efforts to repress political dissent and undermine democratic processes since 2017.”

“Maduro’s desperate attempts to manipulate the democratic processes should leave no doubt that any elections organized by the illegitimate regime, including the December 6 parliamentary elections, will be neither free nor fair,” Pompeo said in a statement.

The Venezuelan government, for its part, denounced the “illegal actions of the United States government” that it said seek to “destabilize” the country on the eve of parliamentary elections.

President Donald Trump’s administration has been ramping up sanctions against adversaries Iran and Venezuela as it prepares to hand over on January 20 to President-elect Joe Biden.

The Treasury Department said CEIEC has more than 200 subsidiaries and offices around the world. Monday’s decision allows a 45-day grace period for the company’s partners to wind down operations or face US punishment.

CEIEC was previously under US sanctions from 2006 to 2008 under a law that prohibits activities seen as helping weapons proliferation from Iran and Syria. – Rappler.com