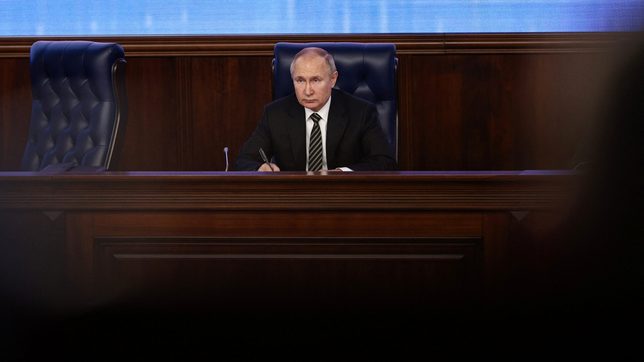 The measures, to be discussed in a meeting of senior officials on Tuesday, would be in addition to economic sanctions the Biden administration is contemplating should Russia invade, after massing tens of thousands of troops along the Ukrainian border.

US President Joe Biden has threatened devastating actions against Russia, to try to warn Putin off any possible military incursion. Putin has denied that Russia plans an invasion.

Measures to be discussed at the White House meeting include “extraordinary” export control measures that could choke off broad swaths of industrial and consumer technologies to Russia, said the official, who spoke on condition of anonymity.

The measures being discussed could halt Russia’s ability to import smartphones, key aircraft and automobile components, and materials from many other sectors. They could have a major impact on Russian consumers, industrial operations, and employment, the official said.

The official said the potential measures would be unprecedented for Russia. They would employ tools used by former President Donald Trump’s administration, and carried forward by the Biden administration, to block Chinese telecommunications company Huawei from accessing advanced semiconductors.

US officials plan to consult closely with key partners in Europe and Asia that could be implicated by these measures and to encourage coordinated efforts where appropriate, the official said.

Russia’s cellphone market is dominated by foreign companies like Apple, Samsung and Huawei , which became subject to a new Russia law this year requiring them to install Russian software. – Rappler.com