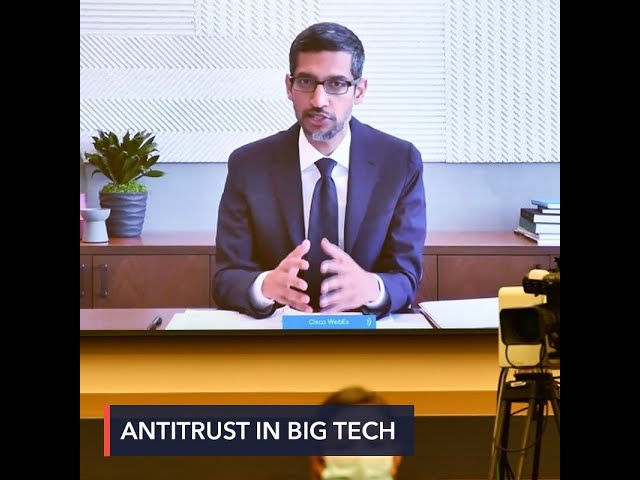 Facebook Twitter Copy URL
Copied
(UPDATED) Representative David Cicilline, chairman of the House antitrust subcommittee, calls tech giants 'the emperors of online economy' whose powers must not go unchecked and to which users must not bow to

Amazon, Apple, Google and Facebook are too powerful and will likely emerge from the coronavirus pandemic even stronger, the head of a US congressional antitrust committee said Wednesday, July 29, at a high-stakes hearing which featured a grilling of the CEOs of the four US tech giants.

Tim Cook of Apple, Jeff Bezos of Amazon, Mark Zuckerberg of Facebook and Sundar Pichai of Google appeared jointly by video before the House of Representatives subcommittee conducting an investigation into market dominance. 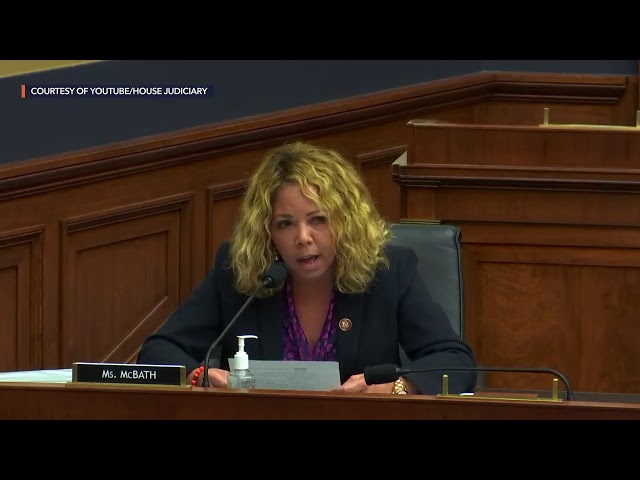 Democratic lawmakers questioned the vast market power of the companies while Republicans accused Facebook and Google in particular of stifling conservative voices.

“Simply put, they have too much power,” said Representative David Cicilline, a Democrat from Rhode Island who chairs the panel which has been conducting a year-long investigation into the business practices of the four companies.

“This power staves off new forms of competition, creativity, and innovation,” Cicilline said. “The dominant platforms have wielded their power in destructive, harmful ways in order to expand.”

“Whether it’s through self-preferencing, predatory pricing, or requiring users to buy additional products, the dominant platforms have wielded their power in destructive, harmful ways in order to expand.”

Cicilline called them the “emperors of online economy” whose powers must not go unchecked and to which users must not bow to. He said that these companies’ power and size are incompatible with democracy. One symptom of the situation, he said, is that users aren’t able to find a real alternative to these platforms despite user issues such as being surveilled.

Meanwhile, Democrat Jerry Nadler compared the tech giants to the US railroad monopolies of the past, saying that these 4 dominant platforms “comprise the essential infrastructure for the 21st century” with the “ability to control access to markets” thanks to their “outsized share of online services.”

While the hearing was called to focus on whether the companies have abused their dominant positions in the market, violating antitrust laws, it veered quickly into the hot topic of political bias.

“I’ll just cut to the chase – big tech is out to get conservatives,” said the representative from Ohio. “That’s not a suspicion. That’s not a hunch. That’s a fact.”

Republican Gregory Steube of Florida disputed Google’s removal of a video promoting the unproven COVID-19 treatment  hydroxychloroquine, saying it was seeking “to silence physicians in their opinion.”

President Donald Trump, who has accused Facebook and Twitter of censoring his remarks and being biased against conservatives, weighed in with a tweet shortly before the hearing began.

“If Congress doesn’t bring fairness to Big Tech, which they should have done years ago, I will do it myself with Executive Orders,” Trump said. “In Washington, it has been ALL TALK and NO ACTION for years, and the people of our Country are sick and tired of it!”

Facebook’s Zuckerberg and Google’s Pichai pushed back against claims that their platforms filtered out conservative views.

“Our goal is to offer a platform for all ideas,” Zuckerberg said. “We want to give everyone in the world a voice.”

“We approach our work in a non-partisan way,” said Pichai. “We’ll continue to conduct ourselves in a neutral way.”

Apple’s Cook faced tough questioning over the market power of the company’s App Store and its treatment of developers.

“We treat all app developers the same,” Cook said. “We do not retaliate or bully people.”

Some lawmakers sought to play down the competitive harms of the companies, which have also won praise for innovating and introducing new technologies.

“Being big is not inherently bad,” said Jim Sensenbrenner, a Republican from Wisconsin. “Quite the opposite, in America you should be rewarded for success.”

Cicilline, the panel chairman, expressed concern that the firms would emerge even stronger from the coronavirus outbreak.

“Prior to the COVID-19 pandemic, these corporations already stood out as titans in our economy,” he said. “In the wake of COVID-19, however, they are likely to emerge stronger and more powerful than ever before.”

Bezos, in his first appearance before a congressional committee, defended Amazon’s dealings with third-party sellers after a blistering attack from Cicilline.

“Isn’t it true that small businesses have no real option but rely on Amazon to connect with customers to make online sales?” the committee chair asked.

“We’ve heard from third party sellers again and again during the course of our investigation that Amazon is the only game in town.”

Bezos disputed the characterization while adding, “There are a lot of options for small firms. I think we are the best one.

The CEOs, in their prepared comments, highlighted their American roots and values.

Bezos, in his first appearance before a congressional committee, spoke of his modest upbringing and initial backing from his parents to start Amazon and its early losses of billions of dollars.

“I walked away from a steady job into a Seattle garage to found my startup, fully understanding that it might not work,” said Bezos, the world’s richest person.

Zuckerberg called Facebook a “proudly American company” and added that “our story would not have been possible without US laws that encourage competition and innovation.”

Cook described Apple as “a uniquely American company whose success is only possible in this country,” and that the California giant is “motivated by the mission to put things into the world that enrich people’s lives.”

“An important way we contribute is by building products that are helpful to American users in moments big and small, whether they are looking for a faster route home, learning how to cook a new dish on YouTube, or growing a small business,” Pichai said in his remarks.

Hours ahead of the hearing, fast-growing video app TikTok also accused Facebook of “maligning attacks” that are part of a movement “disguised as patriotism and designed to put an end to our very presence in the US.”

The hearing takes place against a backdrop of antitrust investigations in the United States, Europe and elsewhere.

Current US antitrust laws make it difficult for enforcers to target companies simply for being large or dominant without also showing harm to consumers or abuse of market power.

The committee, however, could lay a blueprint for antitrust in the digital era that would require a fundamental rewrite of the century-old competition rules.

Robert Atkinson of the Information Technology and Innovation Foundation, a think tank often aligned with the sector, said, “These companies create enormous value for hundreds of millions of users and small businesses,” Atkinson said. “Congress shouldn’t twist antitrust law to launch an ill-defined broadside on internet platforms as a class.” – with reports from Gelo Gonzales/Rappler.com