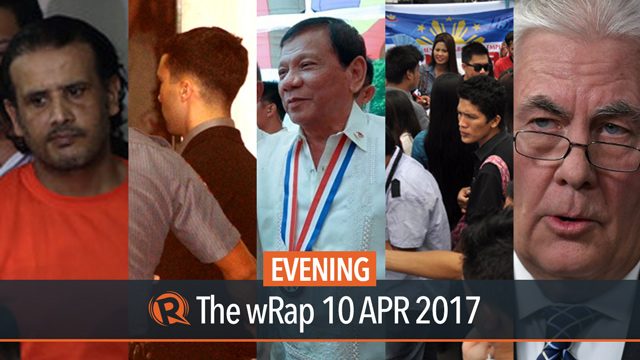 A Social Weather Station survey shows majority of Filipinos are still satisfied with President Rodrigo Duterte’s performance as the country’s chief executive. A Pulse Asia survey shows economic issues remain the top concern of Class D and E while it’s criminality for Class A, B, and C. The Court of Appeals affirms a trial court ruling that declared United States Marine Joseph Pemberton guilty of homicide for the death of Filipina transgender Jennifer Laude 3 years ago. The Kuwait government cancels the passport of Hussein Al-Dhafiri, a bomb maker who was arrested in Taguig in March and has alleged links to ISIS. The United States warns Russia that any more chemical attacks by the Syrian regime would be ‘very damaging’ to their relationship.