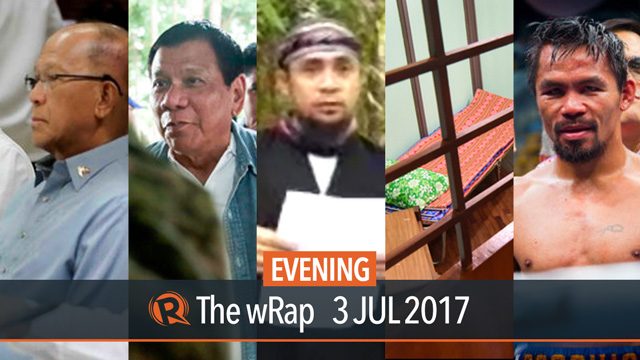 Defense Secretary Delfin Lorenzana is confident the Supreme Court will uphold President Rodrigo Duterte’s martial law declaration. President Rodrigo Duterte creates an inter-agency task force to take charge of the recovery and rehabilitation of Marawi City. Defense Secretary Delfin Lorenzana says Isnilon Hapilon, the Abu Sayyaf leader and supposed leader of ISIS in Southeast Asia, is still inside Marawi City. Ilocos Norte Governor Imee Marcos would still be able to perform her duties as chief executive of the province should the House of Representatives order her arrested. The Games and Amusements Board files a protest before the World Boxing Organization to review the performance of the judges and referee in the Manny Pacquiao vs Jeff Horn WBO welterweight title fight.