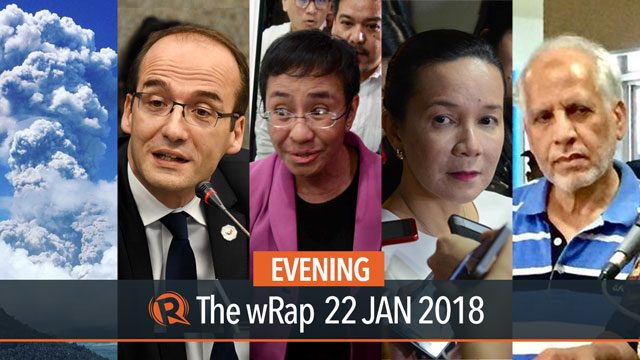 The Mayon Volcano is placed under Alert Level 4  after it spewed a giant ash column past noon. Sanofi Pasteur vows to shoulder the expenses of dengue victims, should it be scientifically proven that the problems are caused by its dengue vaccine Dengvaxia. Rappler CEO and Executive Editor Maria Ressa appears before the National Bureau of Investigation for an initial hearing over a complaint for cyber libel. Senator Grace Poe calls on the Land Transportation and Franchising Regulatory Board to ‘explain the math’ behind the 45,700-cap on the number of cars operating under ride-hailing companies. The Philippine National Police arrests an Iraqi national who is suspected to have links to foreign extremist groups on Sunday in Pampanga.