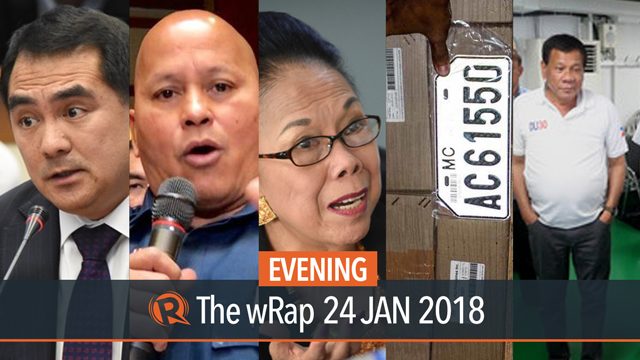 The Senate public order committee recommends immediate disciplinary action against or even disbarment of University of Santo Tomas Law Dean Nilo Divina and other alumni of the Aegis Juris Fraternity over the fatal hazing of Horacio Castillo III. Philippine National Police Chief Ronald dela Rosa will require policemen to wear body cameras only after all police stations have at least one body camera. The Land Transportation Office can now release around 700,000 license plates to motorists after the Supreme Court lifted the temporary restraining order it issued in 2016. Former Commission on Higher Education chairperson Patricia Licuanan says Malacañang warned her more allegations will be thrown at her if she did not resign from her post. President Rodrigo Duterte says Southeast Asia may need China to secure its waters from pirates and terrorists.