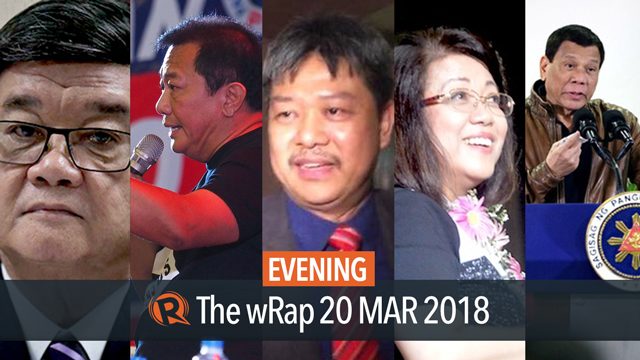 Justice Secretary Vitaliano Aguirre issues an order ‘vacating the dismissal’ of charges against alleged drug lords Kerwin Espinosa and Peter Lim. Speaker Pantaleon Alvarez says Special Assistant to the President Bong Go will be part of ruling party PDP-Laban’s senatorial slate for the 2019 elections. Justice Secretary Vitaliano Aguirre  admits he met with Executive Secretary Salvador Medialdea and the lawyer of alleged pork barrel scam mastermind Janet Lim Napoles in Malacañang ‘two or three weeks ago.’ Chief Justice Maria Lourdes Sereno defends her incomplete submission of Statements of Assets, Liabilities, and Net Worth to the Judicial and Bar Council by saying that other Chief Justice nominees in 2012 did not submit all their SALNs too. The International Commission of Jurists urges the Philippine government to reconsider what it describes as a ‘hasty and ill-conceived’ decision to withdraw from the International Criminal Court.