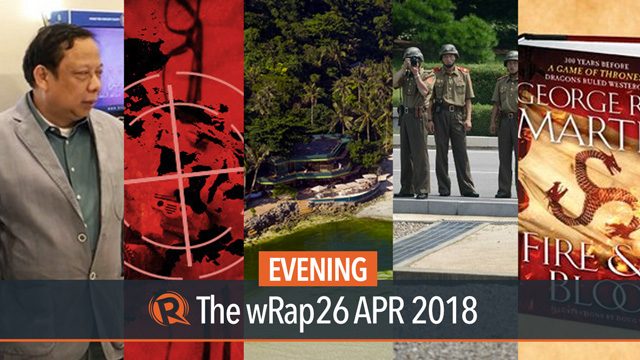 President Rodrigo Duterte signs a proclamation declaring a state of calamity in 3 barangays in Boracay on the day of the shutdown of the world-famous island. The Philippines says  it handed Kuwait a diplomatic note to convey its ‘great displeasure’ after the Kuwaiti government declared Philippine Ambassador Renato Villa as ‘persona non grata.’ The Philippines slides 6 spots in the 2018 World Press Freedom Index amid President Rodrigo Duterte’s continuous attacks against the media. North Korean leader Kim Jong-Un and South Korean president Moon Jae-in will meet at the Military Demarcation Line that divides the peninsula before their summit Friday. Game of Thrones author George RR Martin says the long-awaited 6th installment in his A Song of Ice and Fire series will not be coming any time soon.