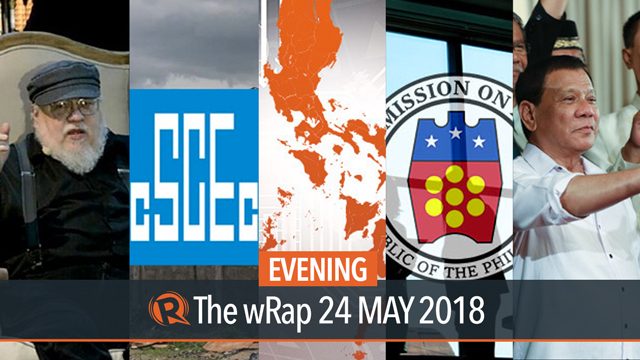 Presidential Spokesperson Harry Roque downplays concerns over the possible involvement in Marawi rehabilitation of two Chinese firms blacklisted by the World Bank for corrupt practices. The Philippines drops 9 notches to 50th spot out of 63 economies in this year’s World Competitiveness Yearbook rankings of the International Institute of Management Development. The House of Representatives asks President Rodrigo Duterte to certify as urgent the proposed Bangsamoro Basic Law. Government Corporate Counsel Rudolf Jurado says 16 lawyers of his office have been receiving ‘secret allowances’ from government-owned and -controlled corporations or GOCCs. An animated film based on an early book by Game of Thrones author George R.R. Martin is set to be produced by Warner Bros.