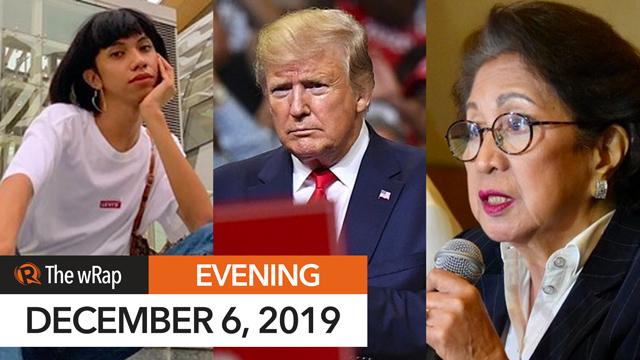 Malacañang tries to discredit a survey of the Social Weather Stations or SWS Friday, December 6, after it shows most Filipinos are worried about the influx of foreign Chinese workers.

In Day 6 of the 2019 Southeast Asian Games, marathon newcomer Christine Hallasgo bags the gold for the women’s event.

US President Donald Trump will likely face at least 3 articles of impeachment in the House of Representatives. They are: abuse of power and bribery, obstruction of Congress, and obstruction of justice.

Internet sensation Mimiyuuuh is now a voice option in navigation app Waze. As a voice option on the app, she tells drivers to “skrrt skrrt!” through the roads. – Rappler.com