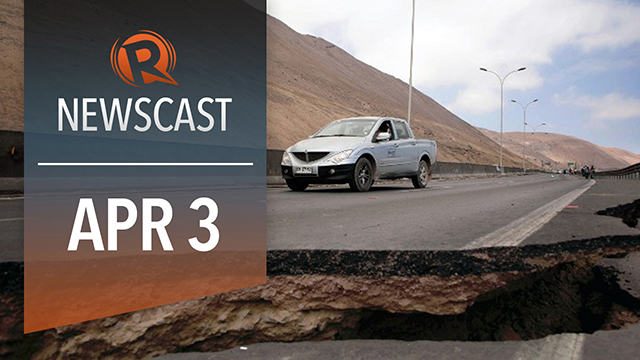 Facebook Twitter Copy URL
Copied
Another earthquake hits Chile. China asks the Philippines to reconsider negotiation. A soldier kills 3 people at a US military base

Another powerful 7.8- magnitude earthquake shakes Chile late Wednesday, Thursday morning in Manila.
This comes a day after a deadly 8.2 quake kills at least six people.
Officials issue new tsunami warnings, forcing thousands to flee to higher ground.
There were no immediate reports of fatalities or major damage from the new quake.
Tuesday’s 8.2-magnitude quake triggers a minor tsunami in northern Japan, thousands of kilometers across the Pacific.
The Japan Meteorological Agency says waves of 20 centimeters or 8 inches were monitored in the city of Kuji early Thursday.
The agency warns, higher waves may hit Japan later.
In 1960, a 9.5-magnitude earthquake in Chile sent a tsunami across the Pacific that killed more than 140 people in Japan.

China asks the Philippines to reconsider bilateral negotiations in resolving the territorial row over islands in the South China Sea or West Philippine Sea.
it adds, it’s Chinese tradition to avoid lawsuits, especially with long-standing “friends” like the Philippines.
In a statement, Chinese embassy in Manila spokesperson Zhang Hua calls the Philippines a “good neighbor” and a “friend.”
He explains why Beijing rejects the case Manila filed before an international court over territories in the South China Sea.
China prefers to resolve territorial disputes through bilateral negotiations.
Zhang says it’s part of Chinese culture to avoid a lawsuit.
He adds, “The Philippine people also value friendship and good faith. We see every reason for both sides to sit down
and resolve problems through negotiations instead of taking the issue to court.”
Zhang also urges Manila to “correct its mistake” and return to what it calls the right track of bilateral talks.

Military sources say the Abu Sayyaf Group may be responsible for the kidnapping of a Filipino hotel worker and a Chinese tourist in Malaysia.
Sources say the 6 armed men were former members of the Moro National Liberation Front faction of Nur Misuari, but had since joined the Abu Sayyaf.
On Wednesday night, the suspects kidnapped a 29-year-old Chinese tourist and a 40-year-old Filipino hotel receptionist at the Singamata Reef Resort in Semporna, Malaysia.
Initial police reports say the 2 women may have been brought to Bakong Island in Tawi-tawi, in the southern Philippines.

A Manila court freezes the properties of the family of Janet Napoles and other suspects in the pork barrel scandal.
Properties suspected of being acquired illegally from the scam are covered by the asset preservation order
The pork barrel scam implicates lawmakers who are accused of channeling pork barrel funds to fake NGOs.
A similar order was issued in February, but was effective only for 20 days.
The court also denies the appeal of pork scam whistleblower Benhur Luy to be exempted from the assets freeze.
Luy earlier said his status as state witness exempts his assets.

STORY 5: SERGE: PDAF SCAM A BLOW TO THE SENATE

With presidential elections two years away, political kingmaker Senator Serge Osmeña talks about possible scenarios for 2016.
He says legislators who get kickbacks from their pork barrel will be “less motivated” to run again.

SERGE OSMEÑA, PHILIPPINE SENATOR: Those who used to cheat on their PDAF – not all lawmakers cheat on their PDAF – they may have less motivation to be running for reelection or to have their relatives to run for Congress… Now, there will be no more discretion on the lawmaker after the budget is approved.

Osmeña says the pork barrel scam hit the integrity of the Senate and regaining public trust will be a challenge.

SERGE OSMEÑA, PHILIPPINE SENATOR: It’s been a terrible blow to the reputation of the Senate, we’re supposed to be an institution that is like Caesar’s wife – above suspicion. Of course it’s never been that way throughout history but still the level of respect has fallen by several degrees… several dozens of degrees.

Osmeña shares who he thinks might become possible frontliners should they decide to run for the 2016 presidential elections.

SERGE OSMEÑA, PHILIPPINE SENATOR: You’ve got a marvellous candidate in Grace Poe. Bam Aquino should also be considered though most people say he’s too young but he’s a very bright fellow and you never know – he might be able to make up a lot of ground in two years. So let’s see. Then we’ve also got the Nacionalista Party which should come forth with the likes of Alan Peter Cayetano even his sister Pia. Of course there’s Chiz Escudero, who’s being considered for the presidency as early as 2009… why not, he has Heart now!

President Benigno Aquino poses with the Ateneo women’s volleyball team… for a selfie!
The photo makes the rounds online after the University Athletic Association of the Philippines’ women’s volleyball champs dropped by for a courtesy call in Malacanang.

US space agency NASA cuts ties with Russia, except for cooperation on board the International Space Station or ISS.
In a memo, NASA says it made the decision because of “Russia’s ongoing violation of Ukraine’s sovereignty and territorial integrity.”
The agency also bans NASA employees from traveling to Russia and Russian visits to NASA facilities.
But the agency says it will continue to work with the Russian Federal Space Agency to maintain the operation of the ISS.
Russia’s Soyuz spacecraft is the only means of transport to the ISS for the world’s astronauts.

A soldier kills at least 3 people and injures 16 before turning the gun on himself at Fort Hood, the US military base devastated by a deadly 2009 rampage.
CNN cites an official saying the soldier, who served in Iraq, reportedly had mental issues.
Officials say there is no known motive for the shooting.
In November 2009, Major Nidal Hasan opened fire at a medical facility in the sprawling Fort Hood base, killing 12 and wounding more than a dozen others.

STORY 9: MORNING LIGHT COULD BE SECRET TO HEALTHY WEIGHT

A new study suggests the secret to healthy weight could be as simple as seeing the morning light.
Researchers from Northwestern University say morning sunshine may have ‘an influence on body mass,’ regardless of food intake and exercise.
Light synchronizes the internal body clock that regulates rhythms, which in turn also regulates energy balance.
The study’s authors suggest those who want to lose a little weight should get more bright light between 8 am and noon.
As little as 20 to 30 minutes could be enough to affect the body mass index.

Photo of woman from Shutterstock

STORY 10: THE wRap: YOUR WORLD IN ONE READ

At number 6, In a unanimous verdict, Australia’s highest court recognizes the existence of a third “non-specific” gender that is neither male nor female.
The decision ends a long legal battle by sexual equality campaigner Norrie to overturn a law saying gender is a “binary” concept involving only men or women.
The Court rules not everyone should be forced to identify as a man or woman, adding some people could describe themselves as gender neutral.

At number 8, medical experts say efforts to send humans to Mars poses health risks beyond the limits of what space agency NASA currently allows.
A report by the Institute of Medicine says health risks from short-term missions in space include nausea, weakness, and blurred vision.
Long-term risks include radiation-induced cancer and the loss of bone mass.

At number 9, after annexing Ukraine’s Crimea region, Russian President Vladimir Putin turns to domestic problems, finalizing his divorce from his low-key wife.
Russia’s state-owned news agency breaks the story late Tuesday…
but the BBC says the Kremlin may have managed the story because local media ignored it.
None of the major TV channels reported the formal breakup of Russia’s most famous couple.
In June, the two announced they were breaking up.
There were rumors Putin planned to marry former Olympic gymnast Alina Kabayeva, one of the torchbearers at the opening of the Sochi Winter Olympics last February.

At number 10, it’s been just over two years since our site went live and 7 months since we dropped beta.
On Wednesday, we rolled out a new and improved design that looks better, loads faster, and makes it easier to discover new stories.
This new site was redesigned from the ground up and is optimized to provide the best Rappler experience — whether you’re on a desktop, tablet, or smartphone.
In Rappler 3.0, for example, we’ve made the Mood Meter smarter and more intuitive.