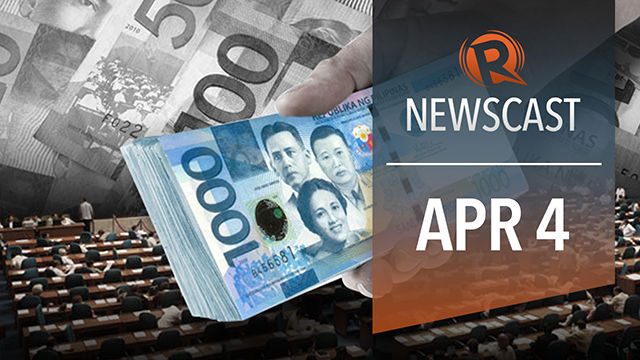 STORY 1: MORE LAWMAKERS TO BE CHARGED OVER PORK SCAM

A new group of lawmakers will be charged for illegal diversion of the Priority Development Assistance Fund or PDAF to bogus projects.
On Friday, Justice Secretary Leila de Lima says a third group of cases will be filed before the Office of the Ombudsman.
De Lima refuses to say how many lawmakers nor to name them.
She says the cases still involve alleged pork barrel scam mastermind Janet Lim Napoles but a new set of lawmakers will be implicated.
The pork barrel scam is considered the biggest and most explosive corruption scandal to hit Philippine politics in recent history.
It involves diverting discretionary funds to fake non-governmental organizations made possible with the collusion of lawmakers.
The Justice Department’s announcement came as the Ombudsman files a resolution to charge Napoles and Senators Bong Revilla, Juan Ponce Enrile, and Jinggoy Estrada with plunder for allegedly receiving kickbacks from the multi-million-peso PDAF scam.

The Philippines identifies the Filipina kidnapped in Sabah.
The government suspects the kidnappers to be Abu Sayyaf.
In a statement released Friday, the Department of Foreign Affairs or DFA says the abducted Filipina is Marcelita Dayawan, 40 years old.
She’s a member of the staff at the Singamata Reef Resort in Semporna, Sabah, where the abduction took place on Wednesday.
Dayawan was kidnapped along with Gao Huayun, a 29-year-old Chinese tourist between 10:30 and 11 pm.
The DFA says Philippine and Malaysian officials “are closely and actively working together towards the speedy resolution of the case.”
The Abu Sayyaf is believed to be behind the worst terror attacks in Philippine history as well as kidnapping for ransom, often involving foreigners.
It was founded in the 1990s, reportedly with seed money from Al-Qaeda mastermind Osama bin Laden.
The group’s strongholds are Tawi-Tawi, Sulu and Basilan.
The Abu Sayyaf is still holding other foreign hostages, including two European bird-watchers abducted in February 2012.

The government apologizes for the inconvenience to commuters on Metro Rail Transit Line 3.
During a press briefing Friday, presidential spokesman Edwin Lacierda says problems with the MRT can only be addressed by long-term solutions such as buying new coaches.
This will take time.
Lacierda says “The government cannot promise a smoother commute for those taking the Metro Rail Transit 3 in the near future and
can only give an apology for the inconvenience being experienced by the public.”
Commuters forming long lines morning and night are a common sight at MRT stations.
Recently, the railway system suffered malfunctions that caused temporary shutdowns.

It’s nearly 5 months after Super Typhoon Haiyan or Yolanda, yet up to 130,000 survivors still live in tents.
This is roughly about 28,000 families.
It is more than half the population of Tacloban in Leyte, the city worst hit by Yolanda.
Social Welfare Secretary Dinky Soliman calls this the biggest challenge they face.
She says the government hopes to finish transitional shelters by June.
Soliman promises the transitional shelters will meet international standards after the government was criticized about substandard bunkhouses.
Affected residents are expected to stay in transitional shelters for up to two years.
The government plans to finish building permanent, sturdier houses by 2015.
These transitional shelters must withstand an average of 20 typhoons annually.
United Nations development chief Helen Clark says moving Yolanda survivors into decent shelters remains a “compelling need.”

A female photojournalist is killed in eastern Afghanistan Friday.
The Associated Press says its photographer Anja Niedringhaus died when an Afghan policeman shot her and AP colleague, reporter Kathy Gannon.
The attack took place in the town of Khost near the Afghan-Pakistan border.
Gannon was wounded twice and is receiving medical attention.
This is the most recent in a series of journalist casualties in Afghanistan.
In March, Agence France-Presse’s Sardar Ahmad and Swedish journalist Nils Horner were shot dead in Kabul by Taliban gunmen on separate occasions.

On Friday, South Korea says it successfully test-fired a new ballistic missile allegedly capable of taking on its neighbor North Korea.
The launch was carried out March 23, two days before North Korea test-fired two missiles allegedly capable of striking Japan.
The announcement is likely to fuel current tensions on the Korean peninsula.
On Monday, North & South Korea fired hundreds of live shells into each other’s territorial waters.
A month earlier, relations were relatively stable.
In February the rivals had rare, high-level talks, and held a reunion for families divided by the Korean War in 1950.
But the mood soon soured, and in recent weeks North Korea conducted a series of rocket and missile tests.
North Korean leader Kim Jong-Un warns the situation was “very grave” and vowed to “thoroughly crush” what he called a US-engineered policy of hostility.

Former US President Bill Clinton ran into Filipino boxer Manny Pacquiao on the American late night talk show Jimmy Kimmel Live! Wednesday.
Pacquiao was promoting his fight with Timothy Bradley on April 12.
Clinton praised the 8-division champion – a congressman in the province of Sarangani.
He said “I think he’s a great guy and a great role model and he’s very strong and honest. He’s already in the Philippine parliament and I hope he goes right on up the ladder.”
Pacquiao answered, “Right now I’m focused on my position as a congressman.”
Kimmel went on to comment that Pacquiao and his wife Jinkee could become a “power couple” like the Clintons.

Turkey lifts its controversial ban on Twitter Thursday.
This comes a day after the country’s top court said the ban breaches the right to free speech.
Telecoms authority TIB removed court orders enforcing the Twitter ban from its website, and one of its officials say “there has been work to lift the ban on Twitter.”
Twitter welcomes the ruling and tweets “We welcome this Constitutional Court ruling and hope to have Twitter access restored in Turkey soon.”
Prime Minister Recep Tayyip Erdogan on Friday criticizes the lifting of the ban.
He says “We are of course bound by the Constitutional Court verdict, but I don’t have to respect it. I don’t respect this ruling.”
Erdogan ordered the block due to “unmitigated lies” on Twitter and other social media networks claiming widespread graft.
His party won the recently-concluded elections, seen as a referendum on Erdogan’s rule.

STORY 10: THE wRap: YOUR WORLD IN ONE READ

At number 8, a US Senate panel votes to declassify parts of its report on the Central Intelligence Agency’s interrogation program during the George W. Bush administration.
The report concludes the CIA misled the Justice Department, Congress and the public by inflating the effectiveness of so-called “enhanced” interrogation and detention practices.
Civil rights groups celebrate the announcement as proof that embracing torture was neither moral nor effective in getting actionable intelligence.

At number 9, tech company Mozilla’s CEO Brendan Eich resigns after sparking outrage over his donation to an anti-gay marriage campaign.
In 2008, Eich donated $1,000 to California’s Proposition 8 campaign that sought to make same-sex marriage illegal.
Eich steps down Thursday after the gay community protests his appointment.
In a statement, Mozilla says “Equality is necessary for meaningful speech, and you need free speech to fight for equality.”
Figuring out how to stand for both at the same time can be hard.”

At number 10, David Letterman, the longest-serving late-night host in American TV history, will be retiring next year.
He announces his retirement Thursday on his Late Show.
The 66-year-old Letterman’s been a late-night staple since 1982.
Letterman’s home network CBS says Letterman “has given television audiences thousands of hours of comedic entertainment, the sharpest interviews in late night, and brilliant moments of candor and perspective around national events.”

Would you post a selfie after sex?
Apparently, quite a lot do!
The hashtag #aftersex is the latest Instagram trend among couples on the photo-sharing app.
For these couples, there’s no such thing as oversharing.
Most of the photos aren’t too risque – some are even artistic.
The trend even sparked several memes!