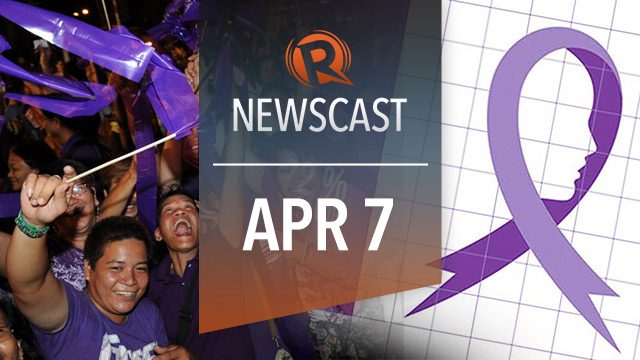 Facebook Twitter Copy URL
Copied
7 of out 10 Filipinos believe RH law is constitutional. Sen Escudero have to say on the expulsion of 3 senators. Australia finds new signals in search for MH370

A new survey by the Social Weather Stations or SWS shows72% of Filipinos are in favor of the controversial Reproductive Health law or RH law, while 77% believe the law is constitutional.
The survey also finds 84% of the respondents believe “the government should provide free supply or service to the poor who wish to use any family planning method.”
The group that commissioned the survey, Forum for Family Planning and Development Inc. says the results “show no surprises” and “affirm public support” for the law.
The release of the survey comes on the eve of the much-awaited Supreme Court ruling on the law’s constitutionality.
The RH law took 13 years and 4 months to pass.
It mandates the distribution of free contraceptives, orders government hospitals to provide RH services,
and requires public schools to teach sex education.
The landmark legislation was temporarily stopped by the High Court last year, after various petitioners questioned its legality.

About 500 activists hold a vigil outside the Supreme Court compound in Baguio City, optimistic that the court will uphold the constitutionality of the RH law.
The supporters, who call themselves the Purple Ribbon for RH Movement, begin a vigil Monday ahead of the expected ruling on the case.
Former Akbayan Representative Risa Hontiveros says the Court is “on the verge of making history.”
She adds, “We hope and pray that it will be on the right side of history when it makes its ruling by providing the populace a chance at a better quality of life rather than bringing them back to dark times.”
Purple Ribbon convenors say they’re optimistic about the law’s victory following a survey showing strong public support for the law.

Senator Chiz Escudero urges the Senate to form its ethics committee as calls mount for the chamber to expel the 3 senators indicted over the pork barrel scam if they refuse to resign.
Escudero responds to an online petition of the #ScrapPork Network, urging Senators Bong Revilla, Jinggoy Estrada and Juan Ponce Enrile to step down, or for the Senate to expel them.
But Escudero says before the Senate can suspend or expel the 3, it should first form the ethics committee.

(We previously asked for the ethics committee to be formed so the case can be heard and to give our fellow senators a venue to air their side.)

Last week, the Ombudsman announced it will file plunder charges against them for allegedly funneling pork barrel funds to fake NGOs in exchange for kickbacks.
Eight months after the start of the 16th Congress, the ethics committee has yet to be formed.
Senate leaders admitted they were having a hard time forming the committee because no senator wants to take on the chairmanship of the “sensitive” panel.
But whether the committee is formed or not, the plunder law mandates the automatic suspension of the 3 senators once charges are filed against them.
Revilla and Estrada say they will not resign or go on leave, while Enrile has been silent since the announcement of the plunder charges.

Doctors at the Ospital ng Makati or Makati Hospital say alleged pork barrel queen Janet Napoles has to undergo a biopsy before any other kind of medical procedure.
Makati Hospital director Doctor Perry Peralta says the biopsy is crucial so doctors can determine the extent of the surgery Napoles needs.
He adds, the surgery will be “more extensive” if the mass in her uterus turns out to be cancerous.
Napoles was transferred to the Makati Hospital from her detention center in Laguna on March 31.
The Makati Regional Trial Court granted her motion for surgery and hospital confinement but denied her request to be treated at St. Lukes Medical Center.
Napoles faces charges for allegedly detaining former aide turned whistleblower Benhur Luy.

The government issues storm surge and tidal warnings for coastal areas in at least 5 provinces in the path of tropical depression Domeng.
Based on a blog post from Project Noah, coastal areas in the Visayas and Mindanao could experience storm surges of 2.27 feet or 0.69 meters above the tidal level.
State weather bureau Pagasa says Domeng was spotted 670 kilometers east of Davao City.
It is forecast to move west northwest.
Mindanao and the regions of Cagayan Valley, Eastern and Central Visayas will have cloudy skies with scattered rainshowers and thunderstorms.
Metro Manila and the rest of the country will have partly cloudy to cloudy skies with isolated rainshowers or thunderstorms.

PHILIP BAUM, AVIATION SECURITY SPECIALIST: Let’s get right back to the beginning of the crisis, so two days into it we find there are passengers that boarded that aircraft with passports that did not belong to them. And Interpol has made it absolutely clear that they’ve got a database of 40 million documents – reported lost or stolen – yet airlines are not able to access that database, they’re not accessing that database at this moment in time. Those passengers should’ve been prevented from getting onboard the aircraft…

Aviation security agencies need to stop working in silos. At the moment you’ve got police, you’ve got immigration, airport security, the airlines, the airports… and none of them communicate with each other. It’s almost a bit like a turf war.

Baum also raises a security risk that has worried the aviation industry: the possibility of cyber threats, like hacking into an airliner, diverting the plane, and preventing pilots from taking control.

PHILIP BAUM, AVIATION SECURITY SPECIALIST: I don’t know, whether or not, the action was taken from the ground… it was an action taken from the ground. There are a lot of people from the aviation industry that are extremely concerned about the cyber-threat to aviation…
The possibility of somebody hacking in to an airliner and diverting it from its intended course, preventing pilots from actually having control of the aircraft. This issue has been raised in the industry only a year ago… Most of the aircraft manufacturers have said, “don’t worry, because the pilots can always override it.” But then again, that one’s out there, and that one’s caused many pilots to worry.

An Australian navy ship detects new signals consistent with aircraft black boxes over the weekend.
Search chief Angus Houston says it’s the “most promising lead” so far in the search for the missing MH370.
Houston says the team now has an underwater search area which was narrowly focused.
The signals so far are encouraging, but more confirmation is needed.
Houston adds, “It could take some days before information is available to establish whether
these detections can be confirmed as being from MH370.”
Houston’s Joint Agency Coordination Centre says 12 planes and 14 ships join in the search over the Indian Ocean.

At number 3, Indians begin voting in the world’s biggest election Monday.
The polls are set to sweep the Hindu nationalist opposition to power at a time of low growth, anger about corruption and warnings about religious unrest.
India’s 814-million-strong electorate is expected to defeat the 10-year rule of the leading Congress party…
led by India’s famous Gandhi dynasty.
The 9-phase parliamentary election ends on May 12 .
Results should be announced 4 days later.

At number 6, genetic mutations found in brain tumors in children open up new possibilities in treating brain cancer.
Investigators find mutations in a gene called ACVR1, which appears to play a role in an incurable form of childhood brain cancer called diffuse intrinsic pontine glioma, or DIPG.
The mutations were found in 20 to 33% of DIPG biopsies in three different studies published in the journal Nature Genetics.

At number 10, comedian and talk show host Stephen Colbert is CBS’ top choice to replace the retiring David Letterman.
Digital magazine Mashable reports Colbert is at the “front-and-center” of potential candidates though he has not had any formal discussions with CBS.
Mashable says Colbert’s contract for the show The Colbert Report runs through the end of 2014, freeing the host up in time to make the move to CBS.
Another candidate for the post is comedian Jon Stewart.