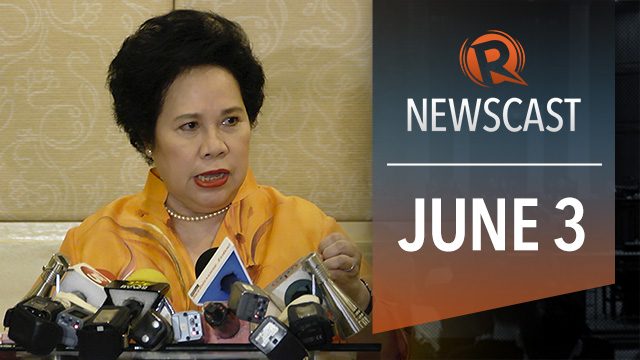 Story 1: IT’S FINAL: MIRIAM STEPS DOWN AS ICC JUDGE
Senator Miriam Santiago says she is stepping down as a judge of the International Criminal Court or ICC.
Three years after she was elected judge, Santiago says her chronic fatigue syndrome forces her to resign from a post she never assumed.
An international law expert, Santiago is the first Filipino and first Asian from a developing country to be elected to the ICC, an independent body that prosecutes individuals for serious international crimes like genocide, crimes against humanity, and war crimes.
But she deferred assuming the post in 2012, citing her high blood pressure and condition known as “lazy bone marrow.”
She held on to her position as Philippine senator.

Story 2: MIRIAM THREATENS TO BLOCK ANEW DINKY SOLIMAN’S CONFIRMATION
Senator Miriam Santiago vows to block the confirmation of Welfare Secretary Dinky Soliman Tuesday.
She cites Soliman’s shifting loyalties between former president Gloria Arroyo and president Benigno Aquino.
Soliman was once welfare secretary under the Arroyo administration.
Santiago says she’ll invoke Section 20 of the rules of the Commission on Appointments or CA at the hearing Wednesday morning.
Section 20, when invoked by any member of the CA, effectively kills any nomination without need for explanation.
Santiago says she will attend Wednesday’s hearing even if she is on “extended medical leave” to block Soliman’s appointment.
In 2011, Santiago also moved to defer Soliman’s confirmation over the same reasons.

Story 4: SC STOPS BIR FROM REQUIRING DOCTORS TO DISCLOSE FEES
The Supreme Court stops the Bureau of Internal Revenue or BIR from requiring doctors to disclose service fees.
The High Court issues a temporary restraining order on BIR Revenue Regulations 4-2014, which orders self-employed professionals, like doctors and lawyers, to disclose their service fees to tax authorities.
The move was part of the BIR’s campaign to “promote transparency and eradicate tax evasion among self-employed professionals.”

Story 5: PH NABS REBEL LINKED TO US SOLDIERS’ DEATH
Philippine security forces arrest a Muslim rebel linked to a 2009 roadside bombing that killed two US soldiers.
The soldiers were riding a military vehicle that rolled over a roadside bomb on the southern island of Jolo.
Mihaji Hamjuda, also known as Mahang, helped manufacture the bomb.
Police officials say Mahang belonged to the Moro National Liberation Front, a rebel group that is the forerunner of the smaller Abu Sayyaf terrorist group.

Story 6: FILIPINOS DIVE INTO BENHAM RISE FOR THE FIRST TIME
For the first time, Filipinos dive into Benham Rise, an underwater plateau now part of Philippine territory.
What’s the significance of Benham Rise and how can it impact our future?
Paterno Esmaquel reports.

It’s the first time divers see the new territory.
A place 50-meters under the sea: Benham Rise– the newest part of the Philippines.
The Philippines won this underwater plateau in 2012 before the United Nations.
It’s found off the coast of Aurora province, islands away from the disputed South China Sea.
It is believed to be rich in minerals and natural gas.
Exploration team leader, Dr Cesar Villanoy, compares their expedition to the one by Ferdinand Magellan, the Portuguese who discovered the Philippines in 1521.

DR CESAR VILLANOY, LEADER, BENHAM RISE PROGRAM: It felt a lot like what Magellan felt. It was exploring. Being able to touch Benham’s bottom was very exciting for many of us, and being able to see what Benham Bank looked like at the bottom was very interesting for scientists as well.

28 researchers and divers join the expedition.
The divers reach the shallowest part of Benham Rise, called Benham Bank.
The team uses a GoPro camera, a dive computer, and a set of weights.
It’s 50 meters deep. Villanoy says scuba divers usually dive only 30 meters under the sea.
Divers stay 50 meters under the sea for only fives minutes.
They do their dives every other day, collecting water samples in between.
Villanoy says the extensive garden of corals surprised their team.
He also says the water is so clear.
19-year-old diver Socorro Rodrigo is the youngest member of the team.
She says Benham Rise can play a crucial role in the country’s future.
To do this, Rodrigo says the government needs political will.

SOCORRO RODRIGO, PHYSICS STUDENT: Benham Rise seems to have been given to us as a second chance. We’ve destroyed a lot of our natural resources, at least exploited them, not sustainably. This seems like a chance to do it right. There’s a lot to be found in Benham Rise – fishes, mining resources, and I hope that we can use them sustainably.

Right now, the experts need the government’s help to explore and study.

DR CESAR VILLANOY, LEADER, BENHAM RISE PROGRAM: Going out to these deep water areas is very expensive, and we need specialized equipment and specialized people to be able to study those areas. Maybe the government should also support marine research even more.

It will take years to discover Benham Rise’s real potential.
For now, divers can only marvel at the beauty of this place that Filipinos can truly call their own.
Paterno Esmaquel, Rappler, Manila

Story 7: CHINA FIRES WATER CANNON IN CLASH WITH VIETNAM SHIP
A Chinese coastguard ship fired a water cannon at a Vietnamese vessel Sunday, in the latest confrontation over disputed waters in the South China Sea.
The Vietnamese vessel is said to be “severely damaged.”
This comes after Vietnam accused a Chinese ship of ramming and sinking one of its fishing boats last month.
China’s installation of an oil rig in the disputed Paracel Islands last May led to a sharp rise in tensions with Vietnam, triggering the biggest anti-China riots in decades.
China claims nearly the entire South China Sea, clashing with the territorial claims of neighbors Brunei, Indonesia, Malaysia, Taiwan, Vietnam, and the Philippines

Story 8: CHINA BLOCKS GOOGLE AHEAD OF TIANANMEN ANNIVERSARY
China blocks several Google websites ahead of the 25th anniversary of the Tiananmen Square crackdown.
Censorship monitoring service GreatFire.org says Google services, including search and Gmail are now blocked.
The move comes ahead of the anniversary of the June 4, 1989 crackdown on pro-democracy protests in Beijing.
Google says it had nothing to do with the shutdown.
China blocks access to websites like YouTube and Twitter using a system known as the “Great Firewall.”

Story 9: APPLE LAUNCHES YOSEMITE OS X, iOS8 IN WWDC 2014
Apple unveils its new operating systems at its Worldwide Developer Conference early Tuesday morning Manila time.
It releases the “Yosemite” OS for desktop devices and new iOS 8 software for iPads, iPhones and iPod devices before an estimated 6,000 developers from all over the world.
This year’s WWDC also marks the launch of Wi-Fi voice-calling from one Apple device to another, whether mobile or desktop.
Yosemite features include “Continuity” which allows tasks started on one Apple gadget seamlessly handed over to another Apple gadget nearby.

Story 10: THE wRap: YOUR WORLD IN ONE READ
At number 5, The United States proposes cuts of up to 30% in carbon emissions from power plants.
Power plants account for some 40% of US emissions of carbon dioxide, the most common greenhouse gas that contributes to climate change.
It is President Barack Obama’s most ambitious action yet on climate change.
The proposal is politically sensitive because coal, among the dirtiest energy sources, remains a major US industry.
The rival Republican Party denounces the plan.

At number 6, Nigeria’s capital Abuja bans all protests in support of more than 200 girls kidnapped in April.
In a report on CNN, Commissioner Joseph Mbu says the protests pose a “serious security threat” to those living around the city.
He claims “dangerous elements will join the groups under the guise of protest and detonate explosives” to embarrass the government.
More than 200 schoolgirls were kidnapped in April by militant terror group Boko Haram, in an act that drew international condemnation.

And at number 10, Maleficent star Angelina Jolie drops hints she will retire from acting after her next big project, a biopic of Cleopatra.
The Guardian reports the star may concentrate on her work as director and United Nations ambassador.
Jolie says about her role as queen of the Nile, “It’s one of those that you think maybe that’s the one you put everything into and that’s where you end it, that’s where you finish – in a great way.”
At a press conference for Maleficent last month, Jolie also said she wanted to do other things.
Jolie’s second film as a director, the biopic Unbroken, will be released in the US in December.

Story 11: SOCIAL MEDIA POST OF THE DAY
For our social media post of the day:
Opponents of Thailand’s military coup risk arrest by flashing the three-finger salute from the Hunger Games movies to defy the ban on public protests.
The gesture has become the unofficial symbol of resistance.
Critics of the May 22 coup, including the youngest daughter of ousted former premier Thaksin Shinawatra, posted photographs of themselves flashing the Hunger Games salute on social media.
A London-based Thai tweets, “Dear #HungerGames. We’ve taken your sign as our own. Our struggle is non-fiction.”
In the “Hunger Games” movies, residents of a dystopian future North America initially use the gesture to mean thanks, admiration and good-bye to someone they love.
It later becomes the symbol of the uprising against a cruel, totalitarian regime.