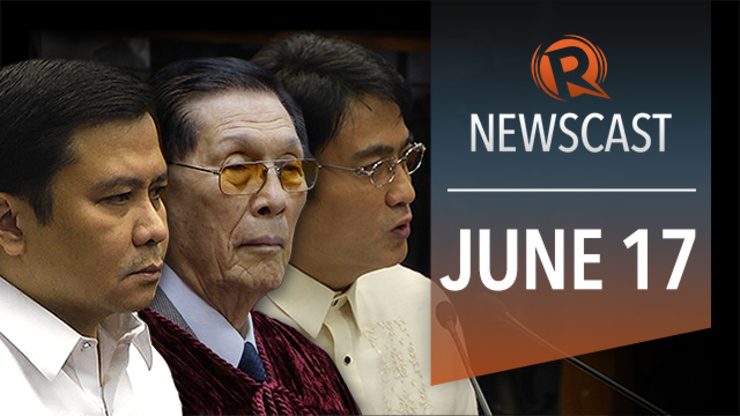 Veteran lawyer Estelito Mendoza will be collaborating with the Ponce Enrile Reyes and Manalastas law firm to defend Senator Enrile in his plunder case.

On Monday, Mendoza filed an entry of appearance before the Sandiganbayan and requested all documents related to Enrile’s case.

Now 84 years old, Mendoza has been practicing law for the past 55 years.

He defended before the Supreme Court the 1973 Constitution that validated Marcos’ reign, paving the way for 20 years of dictatorial rule.

Enrile served alongside Mendoza during the Marcos administration.

The children of Janet Napoles ask the Sandiganbayan to dismiss the graft case against them.

But why were they included in the first place?

Former Napoles employee turned whistleblower Merlina Sunyas tagged Jo Christine and James Christopher Napoles in the siphoning of funds from the Department of Agrarian Reform or DAR in her affidavits.

Suñas said the Napoles children were involved in the diversion of the Malampaya fund worth 900 million pesos or 20.5 million dollars.

The special fund was intended to help farmers who lost their livelihood in 2009 because of typhoons.

The money supposedly ended up in Napoles’ fake NGOs.

Suñas also said the two were officers of their mother’s JLN corporation.

Here’s a Rappler exclusive: The Philippines may soon get compensation for the damage done by a US navy ship on the Tubbataha Reef last year.

The USS Guardian destroyed more than 2300 square meters of corals when it crashed into Tubbataha in January 2013.

US ambassador Philip Goldberg did not disclose the amount the Philippines asked for but earlier, the Philippine government pegged the cost of damage at P58 million or $1.3 million.

Environmentalists demand a fine of up to P1.2 billion or $27 million.

Goldberg says the US would “continue to work closely with the government of the Philippines to resolve the issue of compensation for damage to the reef.”

The US said it was prepared to provide compensation but petitions filed before the Philippine Supreme Court led to delays in negotiations.

It is considered the “crown jewel of Philippine seas” because of its rich marine life.

Jordan’s Prince Zeid al-Hussein is the next human rights chief of the United Nations.

This makes him the first Muslim and Arab to hold the post.

Zeid is currently Amman’s ambassador to the UN.

He will take over as UN high commissioner for human rights on September 1 replacing Navi Pillay of South Africa.

Zeid is steeped in peacekeeping and international justice.

He played a key role in the establishment of the International Criminal Court.

For more than two years, he chaired complex negotiations on genocide, crimes against humanity, and war crimes.

He was also Jordan’s ambassador to the United States and Mexico.

US, IRAN TO WORK TOGETHER ON IRAQ CRISIS?

The United States moves firepower into the Persian Gulf as Sunni militants continue their march across Iraq, in a crisis that sparked international concern.

The aircraft carrier George HW Bush, five other warships and more than 500 Marines are on standby as Washington considers the use of airstrikes against the jihadist fighters.

An indication of the gravity of the situation: US Secretary of State John Kerry said he was open to cooperating with arch-foe Iran to resolve the crisis.

Iran is an ally of Iraq’s Shiite-led government while militants of the Islamic State of Iraq and Syria or ISIS are Sunni.

US and Iraqi officials confirm they had a “brief discussion” on the sidelines of nuclear talks in Vienna, but both said military cooperation was not on the agenda.

He noted the jihadists quickly gained recruits, cash and weapons.

But he said the group has a weakness: the uprising is made up of an unstable alliance with Sunni groups, which may fail in the long term because of its brutality.

US AMBASSADOR GOLDBERG: IRAQ A CENTRAL POINT FOR JIHADIST MOVEMENT

US ambassador to the Philippines Philip Goldberg says Iraq is now the focal point for the transnational jihadist movement.

He also noted that extremists have been crossing borders to join in the fight.

Last Friday, Malaysian police arrested three men, whom they said were planning to fight for ISIS in Iraq and Syria and had links to Abu Sayyaf in the Philippines.

Malaysian police say 15 members of the group have been arrested since April 28.

Goldberg says that although the senior leadership of Al Qaeda weakened, similar groups have sprung up, including ISIS in Iraq and Boko Haram in Nigeria.

PHILIP GOLDBERG, US AMBASSADOR TO THE PH: There are jihadists all over the world who want to get there and join this battle, which is a very troubling sign. What you have is a senior leadership that’s weakened, but still, these nodes that have developed of Al Qaeda like groups that are still active and very much of concern and that’s why so much of the world is focused on Iraq and why this has been a troubling moment as ISIS which went up into Syria to fight jihad there are returning to Iraq to their roots with many foreign fighters in tow including those who may be there from East Asia or other places in the world.

The advance of Sunni militants into Iraq comes just three years after US troops withdrew from Iraq.

MARIA RESSA: Could this be Afghanistan all over again?

PHILIP GOLDBERG: Iraq already is, and already had a conflict and there was hope at the end of the conflict and when we withdrew, that it would be able to be sustained. I think there are a lot of people that have been very disappointed in the Maliki government and the way it has handled the various sectarian issues. And there clearly is a problem in Iraq that goes beyond ISIS.

As ambassador to the Philippines, Goldberg pushed for stronger ties between the two countries, especially in the aftermath of Typhoon Haiyan last year.

In April, the Philippines and the US signed a defense deal that gives the US more access to Philippine bases and allow them to store equipment.

The Philippines’ armed forces chief wants the US to use bases that face the West Philippine Sea or the South China Sea site of the tense territorial disputes between the Philippines and China.

Goldberg says the US has not yet identified the bases it prefers to use, adding the two countries will have to reach a mutual agreement on the locations.

Goldberg says the bases should help the Philippines build up its defense and boost the United States’ presence with allies in the region.

PHILIP GOLDBERG: Let’s go back to basics. EDCA designed to do 2 things. One is to help the PH as it builds a minimum credible defense. And that includes maritime issues, humanitarian assistance, disaster relief. The other part is the rebalance, which means the US will be more present, will be able to help the PH and ourselves in repositioning and being ready for that next typhoon and other disaster, but to be more present in the region as a demonstration that this is the Asian Pacific century, and that the rebalance is part of it. And part of that is the renewal of alliances of which the PH is one.

TALIBAN WARNS FOREIGN FIRMS AS PAKISTAN SENDS IN THE TANKS

The Pakistani Taliban warned foreign firms on Monday to leave the country.

It also vowed to hit back after government tanks, troops and jets were deployed in a long-awaited offensive.

Pakistan’s major cities braced for revenge attacks by tightening security at key installations and ordering soldiers to patrol the streets.

The offensive against the main bastion of Taliban and Al-Qaeda militants was launched a week after an attack on the country’s main airport in Karachi.

Pakistan’s allies like the United States called for an operation to flush out the groups.

The defense team warns against making defendants the sole scapegoats for a national tragedy.

One defendant, the ferry’s first engineer, admits to charges of criminal abandonment.

The crew escaped the sinking vessel while hundreds of passengers remained trapped, earning the country’s condemnation.

Identified by his surname Sohn, the engineer, through his lawyer, says he “will not be making excuses.”

Sohn had attempted suicide once.

The other 14 defendants denied all charges, including Captain Lee Joon-Seok and senior crew members accused of “homicide through willful negligence”, which carries the death penalty.

A nationwide manhunt is ongoing for Yoo Byung-Eun, patriarch of the family behind Chonghaejin Marine Co — the company behind the Sewol ferry.

The Sewol was carrying 476 passengers, including 325 students on a school trip, when it sank off the southwest coast on April 16.

So far 292 have been confirmed dead, with 12 still unaccounted for.

The former political prisoner-turned-politician has been campaigning to amend a military-drafted constitution barring her from becoming president.

The 2008 constitution blocks anyone whose spouse or children are overseas citizens from leading the country – a clause believed to be meant for Suu Kyi, whose late husband and two sons are British.

But Myanmar’s top election body last month warned her against using language that “challenges the army” during her rallies.

The 68 year-old Suu Kyi was released after two decades of house arrest in 2010.

One of Africa’s last ‘great tusker’ elephants, a 50-year-old elephant named Satao, was shot dead by poachers in Kenya.

Satao was famous for its giant tusks that touched the ground and weighed more than 100 lbs.

Nearly 100 elephants have been killed this year by poachers, but wildlife conservationists believe the number is much higher.

The “sentiment mapping” project aims to improve the commuter experience by letting transport operators understand the needs of their passengers and allow them to respond better to emergencies.

Still in its infancy, the team launched a live tool visualization of passengers’ sentiment based on Twitter, covering the area between London and Milton Keynes.

Britain’s Prince George can now stand on his two feet.

Two months shy of his first birthday, the little royal showed the public he can walk.

It’s the first time Prince George has been photographed walking during a charity polo match Sunday.

The young prince turns one on July 22.