Rappler Hangouts: Being a power player on social media 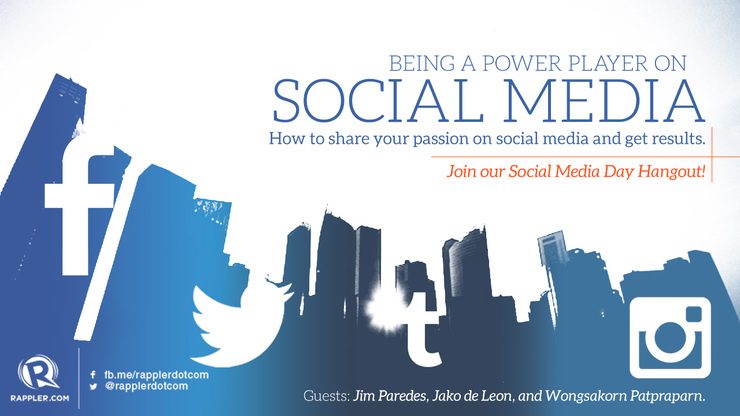 MANILA, Philippines – Have you ever wondered how social media celebrities made it to where they are?

How did these people use a social networking platform – meant for connecting with friends on the Internet – to launch themselves into fame?

Most would say they were just doing what they love and people saw and appreciated that – but is there a secret ingredient to becoming an online hit?

On June 30, 2014, we talked to a few of these Internet stars about their lives and online celebrity status. We found out exactly what it is that takes a person from boredom to stardom using social media.

The guests for this hangout were:

Jim Paredes, who has amassed 641,763 followers (as of publishing). Paredes was a singer-songwriter of the Apo Hiking Society. An activist through music, he’s taken his messages online through social media.

Jako de Leon, who is the creator and executive producer of Bogart the Explorer. Son of Joey de Leon, Jako was the producer and writer of GMA News TV’s Hecklines, which aired from 2011-2012.

Wongsakorn Patpraparn, also known as Chan, who is one of the administrators of the LowcostCosplay Facebook page. The Facebook page is notorious for posting photos of hilarious home-remedies for cosplay woes.

Do you have any thoughts to add to this covnersation? Send them to us using #SocialMediaDay. – Rappler.com