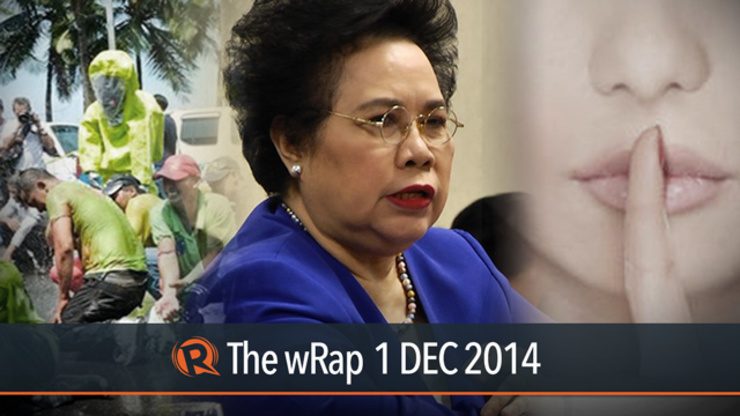 MIRIAM TO FORCE SENATE TO TAKE POSITION ON EDCA
Senator Miriam Santiago says she will file a resolution forcing the legislative to take a position on a defense deal between the Philippines and the United States. Santiago also hits the executive for forging the deal behind the Senate’s back. Malacañang maintains the Enhanced Defense Cooperation Agreement is an executive agreement because it is an implementation of existing treaties.

MIRIAM SANTIAGO, PHILIPPINE SENATOR: The sentiment is widespread that the Philippine Senate does not feel happy that its constitutionally accepted powers such as the concurrence with the ratification of the treaty should be short circuited by the method that’s been employed by the executive branch with respect to EDCA.

COA: P75M FROM DRILON’S 2011 PORK BARREL UNACCOUNTED FOR
The Commission on Audit or COA reports a total of P75 million of Senate President Franklin Drilon’s 2011 discretionary funds are still unaccounted for. The fund was earmarked for the construction of 138 classroom buildings and released in three installments of P25 million. State auditors also report Drilon’s discretionary funds were transferred to a non-government group in a span of six months even without updates on the project.

HOW VULNERABLE IS MANILA TO EARTHQUAKES?
How vulnerable is the city of Manila to disasters? Risk transfer insurance provider Swiss Re considers Manila the second riskiest city in the world next to Tokyo not only because of floods but also because of earthquakes. Two major faultlines are located near the city – the West Valley Fault which experts believe could trigger a 7.2 magnitude earthquake once it moves, and the Manila Trench fault line, which may cause a 7.9 magnitude quake.

PH SEEKS TO BLOCK ADULTERY WEBSITE
Justice Secretary Leila de Lima says she wants to block extramarital dating site Ashley Madison in the country, saying it facilitates crime.
The Canada-based firm, which has the slogan: “Life is short. Have an affair” recently launched its website in the Philippines – where the population is largely Roman Catholic and divorce is illegal. De Lima adds adultery is still a crime in the Philippines. Adultery and concubinage are punishable by at least 6 months in jail under Philippine law.

NETIZENS DECRY DOH ANTI-PREGNANCY VIDEO
Filipinos online slam the Health Department’s latest infomercial for its negative take on teenage pregnancy in a music video. Critics called it “insulting,” while some called out the tune’s similarity to a Korean pop song. The song lyrics contain references to sexual intercourse as “sin” and the teenagers engaging in the act as “stupid” in the vernacular. The video has since been taken down from the department’s Facebook page.

For the full stories, click on the links on your screen. And for those of you watching on mobile, the links can be found on the titles on the article. You can also click on the tabs below to go to a story in the video.