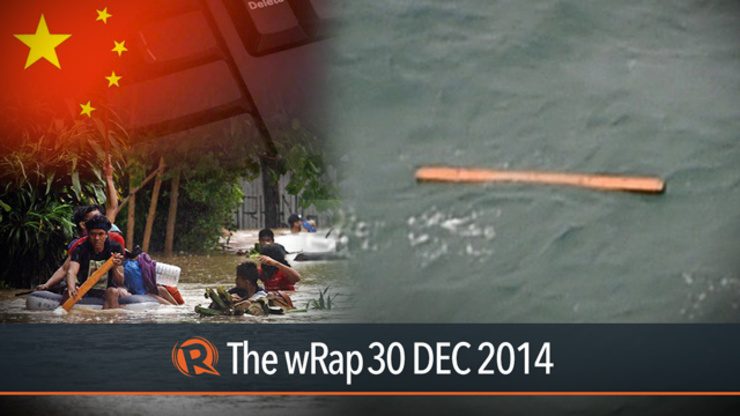 DEBRIS ‘FROM AIRASIA PLANE,’ 3 BODIES FOUND
An Indonesian warship recovers more than 3 bodies from the Java Sea. Earlier an Indonesian navy spokesman said they have – “retrieved 40 bodies and the number is growing. They are very busy now.” An aerial search spotted debris floating on the ocean which included an emergency slide and plane door. Indonesian rescue chief Bambang Soelistyo says search operations are concentrated around 160 kilometers southwest of Pangkalan Bun town on Borneo island. Searchers onboard an air force plane spotted a “shadow” on the seabed in the area believed to be the missing Flight QZ8501.

Note: An earlier version of this newscast said 40 bodies were recovered. Only 3 bodies have been recovered as of Dec 30, 9pm, Manila time. The Indonesian Navy spokesperson who said 40 bodies were found later retracted the statement and said it was a “miscommunication with his staff.”

NAPOCOR SEEKS POWER RATE HIKE
Customers of the National Power Corporation or NAPOCOR may have to pay more for their electricity if a rate hike is approved by the Energy Regulatory Commission or ERC. In its application to the ERC, the power provider asked for an increase of P1.8 per kilowatt-hour in Luzon, P2.2 in Visayas, and P1.5 in Mindanao. If approved, the rates will be implemented over two years to fully recover P1.6 billion or almost $37 million worth of deferred fuel costs.

SWS: FILIPINOS CONSIDER THEMSELVES ‘POOR,’ BUT ‘HOPEFUL’
A Social Weather Station or SWS Survey estimates at least 11.4 million families in the Philippines consider themselves poor. The figure corresponds to 52% of families. The survey also shows record-high levels of poverty thresholds in various regions. For the entire 2014, self-rated poverty among families stood at 54% – up from 52% in 2013 and 2012. But despite this, along with the scandals and tragedies that hit the country in 2014, most Filipinos welcome the new year with hope. Another SWS survey shows 93% of Filipinos enter 2015 with hope rather than fear. The figures are similar to last year’s. Filipinos’ optimism for the new year has not dipped below 90% since 2010 and has been above 80% since the poll started in 2000.

SENIANG MAINTAINS STRENGTH, SIGNAL NO. 1 OVER LUZON
Two days of heavy flooding and landslides kill people as tropical storm Seniang – international name Jangmi – batters parts of Visayas and Mindanao. Local officials say at least 30 die, while the National Disaster Risk Reduction Management Council says at least 21. Thousands leave their homes as the storm brings heavy rains and floods, triggering landslides in some areas and ‘unprecedented flooding’ in Bohol, which is now under a state of calamity. As of 5pm, tropical storm Seniang speeds up and now moves towards Cuyo Island, carrying maximum winds of up to 65 kilometers per hour near the center, and gustiness of up to 80 kilometers per hour. Seniang is located at 108 kilometers southwest of Iloilo City and is expected to be 110 kilometers west of Puerto Princesa City on Wednesday. Storm signal number 2 is up over Cuyo Island, Palawan, Guimaras, Southern Antique and Southern Iloilo. Signal number 1 is up over Calamian Group of Islands, Negros Occidental, Aklan, Capiz, the rest of Iloilo, and the rest of Antique.

For the full stories, click on the links on your screen.
And for those of you watching on mobile, the links can be found on the titles on the article.