Rappler Talk: Technopreneurship in the Philippines 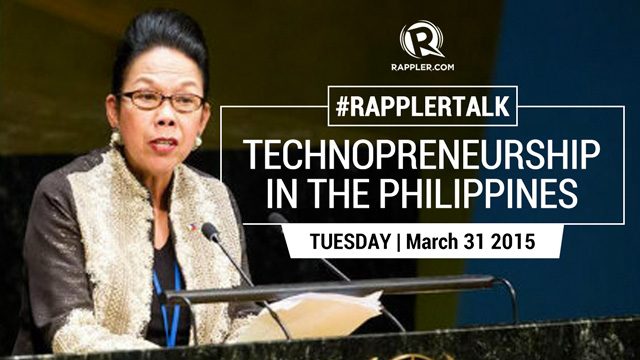 On February 2015, The Commission on Higher Education or CHED and the Philippine S&T Development Foundation Manila-Inc. or PhilDev S&T signed an agreement to develop a “technopreneurship” track to include in the engineering curriculum.

This ensures Filipino engineering students will graduate with the knowledge and skills to utilize and their ideas and innovations.

Also a women’s rights advocate, Licuanan was chair of the main committee of the Fourth World Conference in Beijing twenty years ago. The Beijing Declaration and Platform for Action became the landmark global policy document on gender equality.

Speaking at the 59th session of the United Nations Commission on the Status of Women, Licuanan urged governments to break gender barriers. She says gender equality within laws, although vital, are still insufficient in ensuring de facto equality.

As of 2014, the Philippines fares poorly in 4 out of the 7 Milennium Development Goals or MDG indicators for achieving gender equality and women empowerment.

How will technopreneurship change economic development in the Philippines? How does breaking gender barriers contribute to a nation’s progress?

Also in the discussion agenda today: the K to 12 transition. The K to 12 Program covers Kindergarten and 12 years of basic education (six years of primary education, four years of Junior High School, and two years of Senior High School [SHS]) to provide sufficient time for mastery of concepts and skills.

Lawmakers are asking the CHED to explain how it plans to use its proposed P29-billion transition fund for teachers who will be affected by the transition to the K to 12 basic education curriculum.