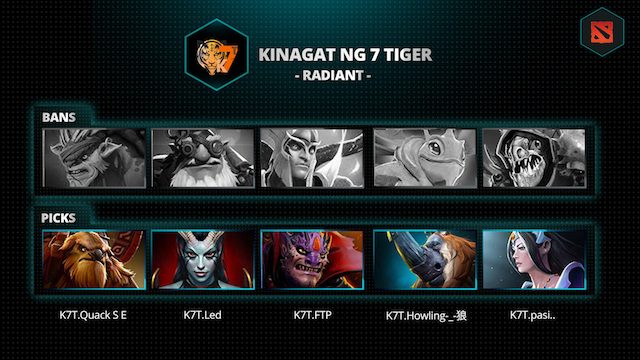 Deadpan Gaming uses its bans mostly for popular carries in the current metagame, with Troll and Jugg being the most interesting of the bunch. DG goes for its favorites: Ogre Magi and Invoker – with the clever inclusion of Vengeful Spirit and Axe for lockdown. Clinkz serves as its core, completing a lineup that can almost immediately recover from a teamfight skill-wise.

K7T bans Sniper, a hero it played with in the previous game. This completes the celebrity core picks with the Troll, Jugg, Anti-Mage and Phantom Lancer bans from DG. Earthshaker is picked first, followed by Magnus as the 4th pick suggesting a possible Critshaker build for K7T. Queen of Pain and Lion provides the much-needed burst for Howling’s team. A rather anti-climactic choice of an offlane Mirana ends the drafting phase.

The contention for the bottom rune before the 0:00 minute mark nearly ends in first blood. DG decides to rush into the high ramp for an early ward and is immediately spotted by K7T.Led and K7T.FTP. Unfortunately for DG, its disables are way behind the frontlines – failing to stun and lockdown a vulnerable Lion. 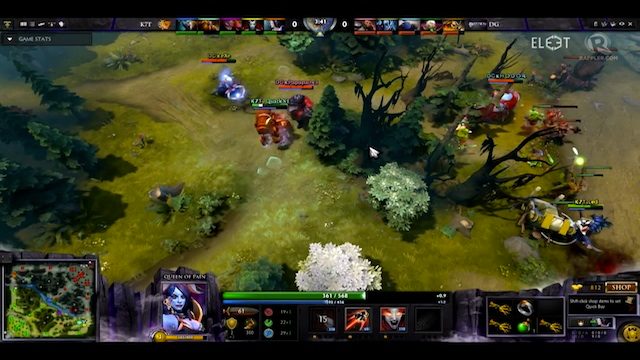 Laning would have proceeded normally, except that K7T kept its players mobile, fighting against DG’s Ogre Magi-Vengeful Spirit-Axe offensive offlane with constant rotation. Before 3 minutes set in, a lot of K7T’s heroes have travelled across the map.

DG.eXe draws first blood 3:41 minutes in, while K7T.Quack carelessly positions himself behind the treeline running along the bottom lane. K7T replies with constant lockdowns and pickoffs on DG.Sneaky at the top lane.

DG.alz decides to go Hand of Midas for his Invoker. Considering that it had a Clinkz losing his lane, this delays DG’s capacity to go online faster. It isn’t apparent to DG at this time, but this hold-up would cost it a lot the moment K7T reaches Level 6. As soon as the 13th minute mark comes in, K7T starts cashing in.

Armed with a blink dagger, K7T.Howling goes into position and skewers four heroes into the tower. DG.Papapao, DG. HODOR, DG.eXe and DG.Sneaky were sent to their deaths with an RP-Echo Slam combination. It was a devastating blow to DG. From this point on, DG tries its best to regain footing but is unable to come ahead of K7T. Around the 20 minute mark, a teamfight in the Dire jungle breaks out. Just when DG players are about to clap their hands in glee after taking down the hit points of K7T’s players, the Radiant pulls off a clutch.

After K7T.Howling fails to pull-off an ultimate and wastes a BKB cooldown on a single hero, the team is scattered and disoriented. K7T.FTP and K7T.Quack SE are easily picked off in exchange for DG.Papapao. K7T.Howling makes a run for high ground as DG.alz tries to finish him off with Invoker’s fanciful spells. With K7T.Howling left with less than 300 HP, K7T.Led jumps in and lands Sonic Wave perfectly. K7T.pasi leaps into the fight with his Desolator-yielding Mirana and helps with the clean-up. 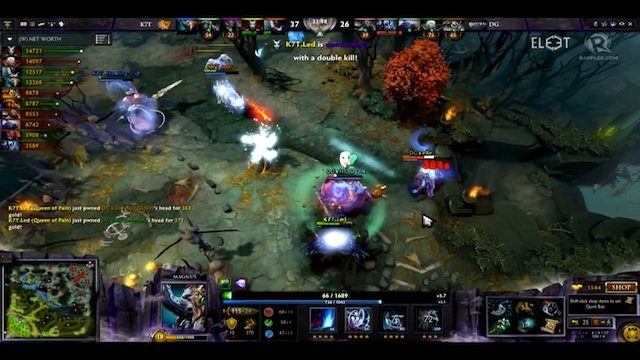 After that last team fight it was pretty much K7T’s game to lose. A small trip to the Rosh pit for the Aegis and a defining clash at the bottom lane secure the match for K7T. It wins with a whopping score of 43-27.